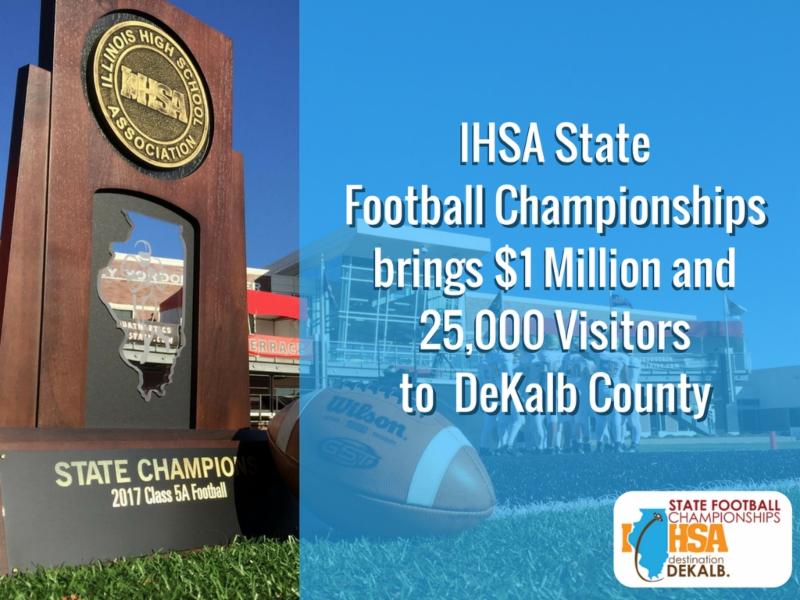 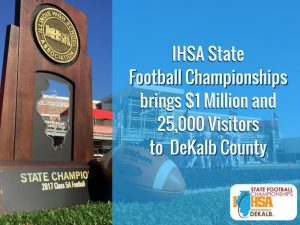 November 24 and 25, 2017, DeKalb County, the IHSA Destination DeKalb Host Committee and volunteers welcomed the 2017 IHSA State Football Championships to Huskie Stadium. The championships featured 16 teams competing in 8 championship games to earn their class (teams are broken up into 8 classes, 1A – 8A, based on school population) state football title.

IHSA Destination DeKalb received glowing feedback from the Illinois High School Association (IHSA), fans, and teams. Visitors stopped and thanked volunteers for offering a warm and hospitable welcome. Several of these visitors had been to Huskie Stadium in previous championship years and said, we “do it up right,” making the championships even more special with all that we do to ensure that everyone has a wonderful experience.

The Spirit Zone is the fan staging area. It’s filled with cheer and dance squads, bands, team mascots, and enthusiastic fans. It features a tent for each of the 16 competing teams to celebrate pre- and post-game and the main hospitality tent, where community ambassadors welcome fans. Thanks to our sponsors, the main hospitality tent is heated with ample seating, a big-screen TV, complimentary hot chocolate, coffee, and popcorn, and 2 interactive inflatables, the mechanical armchair quarterback and a 3-in-1 sports inflatable. The whole area provides a welcoming and festive atmosphere.

The 2017 Spirit Zone saw everything from 23-foot-long inflatable football helmet to a sit-down dinner for 165, and thousands of amazing fans.

While we can only estimate the economic impact the championship weekend had on our local economy, we can share some of the hard numbers that go into this estimate.

Here’s what we know for sure:

6,420 cars parked at the Convocation Center along with 15 RVs

Concessions sold at Huskie Stadium were triple what sold in 2015

4,000 to 5,000 visitors enjoyed the main hospitality tent in the Spirit Zone

Local restaurants reported an average 30% increase in sales vs. Thanksgiving 2016

12 private caterings were booked (down two from 2015; many visitors branched out to local restaurants for pre- and/or post-game dining and entertainment. They are getting familiar with our area)

Based on the above information and using estimates that the Illinois Office of Tourism provides to gauge the economic impact of sporting events, we are estimating the economic impact from the weekend to be about $1 million. This estimate includes direct and indirect spending on hotels, food, gas, facility rental, tent suppliers, catering and other services provided by people taking part in or attending the event.

Research done by the Illinois Office of Tourism shows that visitors who book a hotel room night average an additional $100 in spending for each guest. For those who don’t spend the night, the average spending impact is $40 a day per person. Take into account that we adjust averages based on costs in our area.

The IHSA State Football Championships continues to be a powerful economic engine that fuels local and regional businesses and provides invaluable publicity and visibility for DeKalb County and Northern Illinois University.

It provided exposure to more than 25,000 visitors who might come back to DeKalb County now that they’ve seen what we have to offer. It helps NIU with student recruitment. The impact of the event has residual benefits for hosting future events and meetings. The media coverage DeKalb County got for hosting the event is priceless.

IHSA Destination DeKalb has two more IHSA State Football Championships to host according to our contract with the IHSA.

We look forward to welcoming this premiere IHSA event back to DeKalb County.