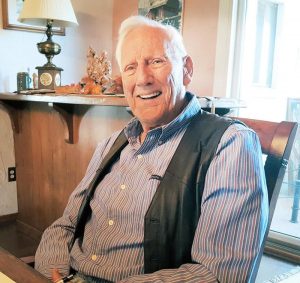 When asked if he completed it, Metcalfe responded, “No, sir, I did not. In fact, I don’t plan to ever do math homework again.”

When asked how he expected to graduate in June without doing his homework, Metcalfe said, “Sir, I don’t expect to graduate. In fact, I’ve just joined the 508th Paratroop Infantry Regiment and I’m leaving right this minute to report for duty.”

Metcalfe stood up from his desk and walked out of school. He had seen the movie “Parachute Battalion” a year earlier while on a double date, and ever since then, knew he wanted to be a paratrooper.

While with the 508th PIR, Metcalfe was dropped outside of Nijmegen in the Netherlands in 1944. After he was injured and left for dead, he became a Nazi prisoner of war.

Metcalfe was interrogated by Heinrich Himmler, a leading member of the Nazi Party, and was forced to spend months at labor camps. Although he escaped once, he was later captured and forced to return.

When the camp was liberated, Metcalfe “borrowed” a convertible car with a fellow DeKalb soldier, met Gen. George S. Patton Jr., and headed to Paris.

A book, “Left for Dead at Nijmegen: The True Story of an American Paratrooper in WWII,” by Marcus A. Nannini, has been written about Metcalfe’s life and his war experiences. It was published by Casemate Publishers in March.

“It’s a true story, and I don’t know if I’d call it history,” said Metcalfe, now 97. “For me, history is past-tense, like Lincoln or Washington. I lived through World War II, I witnessed history being made. For me, it wasn’t history, it was what really happened.”

Metcalfe and the 508th PIR participated in Operation Market Garden, an Allied military operation that begin on Sept. 17, 1944. It aimed at taking control of the road bridge over the river Waal. Although the operation ultimately failed at securing the territory, many Dutch towns, including the cities of Eindhoven and Nijmegen, were liberated.

During a battle in the dark, Metcalfe was in an advanced position and didn’t hear the order to fall back. As his best friend, Ray Meade, tried to reach him, a German shell exploded nearby, throwing Metcalfe high into the air. Meade reached Metcalfe, but seeing his injuries, assumed the worst. Metcalfe was left for dead at Nijmegen, the only member of the patrol who did not return.

Soon after regaining consciousness, hard of hearing and shell-shocked, Metcalfe was taken prisoner by the Nazis. A short time later, he was interrogated by Himmler and he was sent to a labor camp, Stalag XII-A.

While there, Metcalfe helped carry a man to a hospital tent. The man, Elmer Melchi, was shot four times and was bleeding and unconscious. Metcalfe never knew if the man survived until he received a call from him 52 years later while on vacation in Colorado.

Metcalfe and other prisoners were transported to the Luftwaffe POW camp, Stalag Luft III. From there, Metcalfe spent five days and nights being transported to Stalag VII-A in a boxcar with no food, water or bathroom.

At Stalag VII-A, Metcalfe was assigned to clearing roads and digging dead bodies from the rubble of bombed-out buildings in Munich. He later was sent to a family farm, where he was given wooden shoes and helped out as a farm hand. The family took a liking to Metcalfe, giving him their son’s clothes and organizing an Easter egg hunt for him.

With Russian troops drawing near, Metcalfe was recalled to Stalag VII-A. He was able to escape with two other prisoners, but was recaptured while attempting to cross Lake Constance. He was forced to return to the POW camp.

After Stalag VII-A was liberated, Metcalfe left with fellow DeKalb soldier, Billy Carey, whom he had met when he was home on leave. Metcalfe spoke to Carey’s science class at DHS and Carey promised to see him in Germany, which he did.

Metcalfe continued on to Paris, where he stayed for about 10 days before being temporarily housed at Camp Lucky Strike. From France, he traveled by boat back to the United States.

Metcalfe returned home to DeKalb the same way he left, by hitch-hiking, in late May or early June, 1945.

Author Marcus A. Nannini first interviewed Metcalfe in 2014 for a story in “World at War” magazine.

“After a five-and-a-half-hour-long interview, I knew that there was more to Gene’s story than a short article,” Nannini said. “His story deserved to be told as a book. When doing research for the book, I met with him about twice a week for 10 weeks, a total of more than 70 hours of interviewing.”

Since the book, “Left for Dead at Nijmegen: The True Story of an American Paratrooper in WWII,” was published, Metcalfe has been busy making appearances and meeting royalty and world leaders, including Prince Charles of Wales, Princess Beatrix of the Netherlands, Peter Hoekstra, US Ambassador in The Netherlands, and Hubert Bruls, mayor of Nijmegen.

In August, Metcalfe was awarded the Prisoner of War and Purple Heart medals. He also received the Dutch equivalent to the Medal of Honor – The Orange Lanyard – and France presented him the Legion of Honor.

“Once the book came out, Gene received the recognition he always deserved, 20-some-odd medals, including the Bronze Star and Purple Heart,” Nannini said. “That’s why I wrote the book. Gene has an energy that immediately puts people at ease. He has an aura about him that makes you want to walk up to him and shake his hand.

“He risked his life multiple times, saved lives and had an amazing life,” he said. “He was friends with famous generals and admirals and astronauts. He deserved the recognition.”

There also has been talk about turning Metcalfe’s story into a movie.

“I think that a movie could and should happen,” Nannini said. “The book has sold out a couple of times in Holland already. Gene’s story is so amazing and he came close to death so many times.

“Without veterans like Gene, we wouldn’t be here, where we are, enjoying the freedoms we have today,” he said.

Once Metcalfe returned home, he re-enrolled at DeKalb High as a senior. After passing a written test, Metcalfe was given a high school equivalency certificate a few weeks later.

While walking home from school, he remembered something his dad used to say: “Hollywood is nothing but a house of ill-repute, without a roof.” So Metcalfe decided to move to California, where he got a job at an airplane company.

He later earned a degree from University of Southern California and became a teacher.

“If I accomplish anything in my life, it’s stressing that education is important,” Metcalfe said. “I dropped out of school, and I know that school opens a lot of doors for you. Stay in school and get an education.”

During his time off from teaching in the summer, Metcalfe and his wife Paulette traveled to Europe and revisited locations, including Nijmegen, from World War II.

Years later, Metcalfe was reunited with Ray Meade, his best friend that left him for dead. Metcalfe thought his troop abandoned him, but Meade clarified that he was certain Metcalfe had been killed. The two remain friends.

He also was reunited with Elmer Melchi, the man he carried to a hospital tent at Stalag XII-A. Their reunion was covered locally by Fox News and was broadcast nationally by ABC, CBS and NBC.

Metcalfe and his wife Paulette live in Fountain Hills, Arizona, where he says “they take time to relax and enjoy the everyday.”

“World War II opened my eyes, there’s a big world out there,” Metcalfe said. “I witnessed inhumanity and have asked myself how can man be so cruel to one another. Humans killed other humans, hundreds of them, for no reason at all. I saw people shot and killed for nothing. War was hell. … It didn’t make sense then, it still doesn’t make sense, period.”

“But there is beauty in the world, too,” he said. “I wake up and see the beauty in the everyday: the clouds, the stars, people. … You have one shot at life, and you have to enjoy it. “Do something with your life before it’s too late – help people, live life and have a lot of fun.””