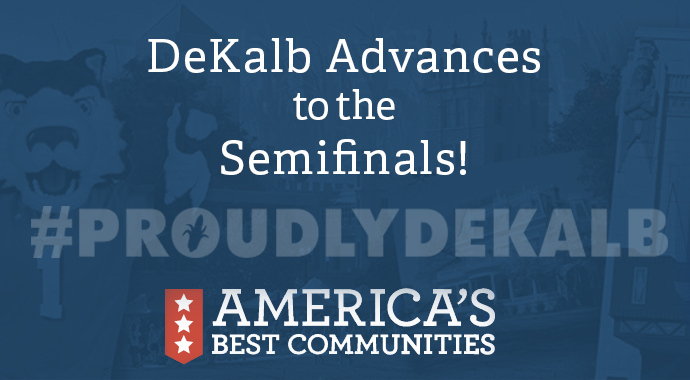 DeKalb is one of just 15 communities nationwide to make competition’s semifinals, with an opportunity to win up to $3 million

DEKALB, IL., Jan. 13, 2016 – DeKalb, Illinois will have the opportunity to continue its journey toward winning the top prize in the $10 million America’s Best Communities competition. Frontier Communications officials today presented DeKalb with a ceremonial ticket to the competition’s semifinals, which includes a trip to the America’s Best Communities Summit in April.

Sponsored by Frontier, DISH Network, CoBank and The Weather Channel, America’s Best Communities has instilled new hope and helped to inspire economic revitalization in small towns and cities across the country.

DeKalb is one of just 15 communities nationwide, and the only community in Illinois, to advance into the semifinals and is now eligible to win major investments to implement its innovative Community Revitalization Plan.

“Great communities don’t just happen. They are the result of people working together for the common good. After achieving this milestone, it is clear DeKalb isn’t just a great community — it is one of America’s best,” said Tom Kuschman, general manager for Frontier Communications in DeKalb. “The next stop for DeKalb will be the America’s Best Communities Summit in Durham, North Carolina on April 26 and 27. That’s where the team will present its revitalization strategy for a chance to win a $100,000 prize grant and one of just eight spots in the competition finals.”

About 350 communities across the country entered the competition, and 50 were selected as quarterfinalists in April 2015. Each of the 50 was awarded $50,000 in seed money to develop a Community Revitalization Plan and partnered with a major national or regional company that served as a strategic advisor as part of the competition’s Adopt-a-Community Program. Among the participating corporations were several members of the Fortune 500.

From this class of 50 quarterfinalist communities, the 15 with the best plans — those with the most innovative ideas being effectively executed — were named semifinalists.

In its Community Revitalization Plan, DeKalb outlined seven key projects to move the community toward achieving its vision.  The community’s plan aims to improve the area’s economy with a focus on arts, local food, education and high technology. Overall, the plan is designed to demonstrate that DeKalb is business friendly, attractive to potential students and residents and encourages the growth of all its residents.

DeKalb and the other 14 semifinalist communities will attend the America’s Best Communities Summit April 26-27 in Durham, North Carolina, where they will present their proposals to a panel of expert judges and executives from the sponsoring companies.

At the end of the summit, eight communities will be named finalists and awarded $100,000 to bring their plans to life. They will have one year to implement their strategies, and the top three communities that make the largest impact and show the greatest potential for achieving sustainable revitalization will be selected as the grand prize winners. The top community will receive $3 million, with second place earning $2 million and $1 million for third.

The Community Revitalization Plan that DeKalb developed for the America’s Best Communities competition, as well as those from the other quarterfinalist communities, will be made public and accessible on americasbestcommunities.com.

“We encourage local leaders in small towns and cities nationwide to review these rural development strategies. They contain innovative solutions that can serve as roadmaps to revitalization for rural communities across the U.S.,” said Frontier Communications Executive Chairman Maggie Wilderotter. “We want to congratulate and thank all of the communities that have participated in this competition for boldly stepping forward to dream big and pursue a brighter future. We look forward to continuing to work with all of these communities for years to come.”

“One in six of us calls rural America home. These communities are the backbone of our country,” said Vince Gill, the country music great who has served as a spokesperson for the competition. “America’s Best Communities has inspired new hope in rural America by providing a hand up, not a hand out. It’s helping our neighbors in small communities lift themselves up by their bootstraps and live their own American dream.”

To explore the communities’ revitalization strategies and for additional information on the competition, please visit www.americasbestcommunities.com.