American Legion, Marine Corps League members aim to give back! 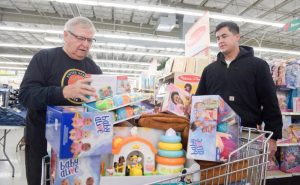 Marine Corps veteran Mike Fogelsanger knows what it’s like to have a Christmas without toys and gifts.

So as the sergeant-at-arms for the DeKalb County Marine Corps League, he wanted to be involved with the league’s long-standing Toys for Tots program, which donates toys to local nonprofit organizations that distribute the gifts to underprivileged families in DeKalb County.

The DeKalb County Marine Corps League teamed up with the American Legion Riders of Sycamore Post 99 to shop for the Toys for Tots program at Farm and Fleet in Sycamore before the store opened Sunday morning. The group of about 15 volunteers filled their carts with toys and clothes for children from newborns to
2 years old and from age 12 to 18.

“I grew up poor, and when I joined the Marine Corps League, I knew I wanted to pay it forward,” Fogelsanger said. “It makes me feel good to help the community. As veterans we served our country, and now we’re continuing to serve our community.”

Thanks to several corporate sponsorships and fundraising events, the group was able to spend $5,000 on toys and clothes. The gifts will remain in the Sycamore Armory until mid-December, when they’re donated to organizations such as The Salvation Army and Hope Haven, among others.

Marine Corps veteran James Brantley of DeKalb recently joined the American Legion Riders, and he wanted to lead the Toy Run. The run, which took place in September, raised about $1,750 for the Toys for Tots program.

Brantley said he didn’t want to see any child go without gifts for the holidays.

“We care about the kids. Some of us grew up without toys, so we know how it feels,” he said.

Roger and Cathy Holtman of Sycamore, both members of the American Legion Riders, said that it means a lot to both of them to help others, especially over the holiday season.

“We didn’t mind getting up early for this. It makes us feel good to give back to the community and help those who are less fortunate,” Cathy Holtman said.

Cassandra Parks, also a member of the American Legion Riders, had a cart full of gifts for teen girls. She said this was her first time shopping for the Toys for Tots program, and she was excited to help.

“There’s a lot of need here, and it’s just a small thing that we can do for the community, and it makes you feel good to help other people,” she said.

Sycamore resident Jean Paulsen also had ever shopped for the program. She said it felt like she was a “secret Santa” as she filled her cart with winter weather gear, clothes and blankets.

“Last year, my grandkids received gifts from a similar program, and they were so excited to get gifts from people they don’t even know,” said Paulsen, who is a member of the American Legion Riders. “It meant so much to them to know that people cared.”

Keith Keutzer of Rochelle usually gets up about 4 a.m. for work, so the early Sunday wake-up call to shop was no big deal for him. The American Legion Riders and Marine Corps League member said he had fun picking out clothes.

“Christmas is for all kids, and it makes me feel good to help kids have a nice Christmas,” he said.

Farm and Fleet manager Lena DiPirro was happy to come in early and open the store so the group could shop. She said the store always looks forward to helping the community, and in fact, already promised to open early again next year.

“The store is theirs to gather what they need. We’re very proud to be involved,” DiPirro said. “If we can help this group help kids, why wouldn’t we do it? It’s a great way to start the holiday season.”