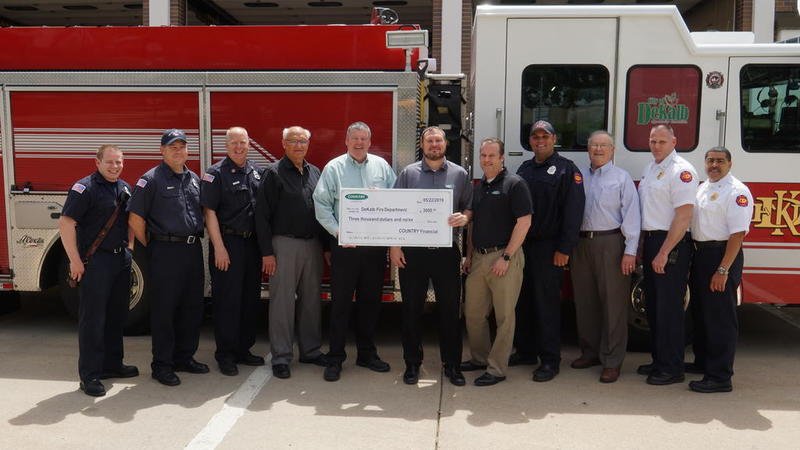 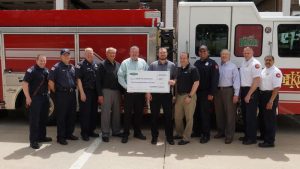 DeKALB – Thanks to a $3,000 grant, DeKalb Fire Chief Jeff McMaster says the department is one step closer to equipping its crews with tools for “dire” situations.

Sycamore-based insurance company Country Financial donated the money as part of its Operation Helping Heroes program, which began in 2015 as a way to support local emergency response teams and nonprofits that benefit active duty service members, veterans and their families. Country Financial representatives, including Mike Shipley, called emergency service providers like the DeKalb Fire Department “pivotal points” for the safety of the community.

“We are thankful we were able to provide a grant to replace the outdated equipment to keep our firefighters as safe as possible,” Shipley said. “We truly appreciate all they have done and continue to do for our community.”

DeKalb Fire Chief Jeff McMaster said the money will help replace 60-minute, self-contained breathing apparatus bottles that have been around for 16 years, and new face pieces for the department’s Hazardous Materials Team. He said he’s been wanting to replace the bottles for some time but has been unable to because of city budget constraints.

“When you have a grant like this come through whenever they’re willing to help us, we use it for the most dire situations,” McMaster said. “There’s a lot of different items to purchase, but when we receive these grants, it goes toward our most critical needs. That’s why it means so much to us.”

McMaster said the breathing apparatus pieces can be used for more than just hazardous response needs.

“Those air bottles, they’re versatile because we can use them for hazardous materials or technical rescue, where you need extended amounts of air,” McMaster said.

In 2019, Country Financial has donated more than $600,000 for Operation Helping Heroes, according to a news release.

*Story provided by The MidWeek: https://bit.ly/2XO1obI