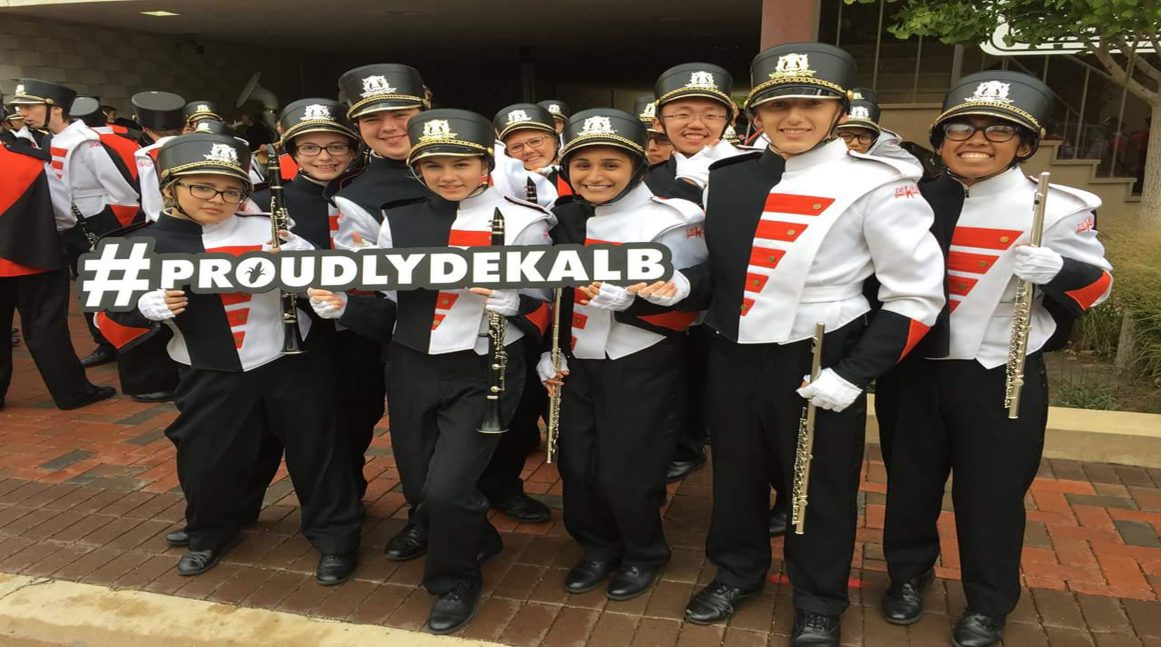 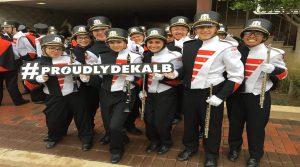 Chicago; Dublin, Ireland; Indianapolis, IN; New Orleans, LA, are just a few of the places the DeKalb High School Barbs have performed in the last dozen years, always in their distinctive black, orange and white uniforms. The current uniforms have lived through 14 marching seasons. They have been used in 70 or more football games; in two to three dozen indoor concerts; in nearly three dozen competitions; and at least 50 parades.

As a result of such prominent use, many of the current uniforms are showing extreme wear. Some are beginning to fall apart, and a growing number each year have issues so severe they cannot be repaired. Every August through October, a few intrepid parent volunteers spend several hundred man hours fitting uniforms, repairing them and endeavoring to keep the world-famous Marching Barbs looking sharp.

The reality is the uniforms have outworked their life expectancy of 12 years so the band’s staff, students and parent boosters have begun efforts to raise the approximately $75,000 needed to secure new uniforms. The new uniforms will feature modern technology that will make them more efficient to use, reduce the upkeep or maintenance on them and offer dramatic savings to the annual dry cleaning expenses.

Several fundraisers are planned to turn the wish for new uniforms into reality. Only with quick action can new uniforms be available by the fall 2018 marching season.

Currently, DHS’s music department is seeking a limited number of business sponsorships in exchange for promotional opportunities. Sponsors will have their logo features on the DHS band’s 29’ bright orange trailer. These sponsorships will be good for two years, providing local businesses a tremendous amount of exposure at the 15-20 appearances the Marching Barbs make annually both at home and throughout the state. The trailer will be prominently on display during every home football game and will be pulled in a number of parades around northern Illinois in addition to following the band to its many appearances and competitions.

Additionally, these sponsors will be recognized in all print programs for the DHS Wind Ensemble, Jazz Ensemble, Concert Band and Percussion Ensembles for the duration of the sponsorship. The two-year opportunity is $1000, payable to the DHS Band. Sponsorships begin January 2018 with logos being printed for the trailer as soon as possible and the sponsorships running through the end of 2019. To learn more or request a contract, contact the DHS Music Department at (815) 754-2120.

Coming up soon, the DeKalb Band Parents, an ad hoc committee of DeKalb Music Boosters, will host the 2nd Annual Draw Down supporting DHS band. Ticket holders will have the chance to win a variety of cash prizes, including a grand prize of $3,000! The event will be held at St. Mary’s Hall in Sycamore from 5pm-10pm on February 17. Tickets are available for $50 each and include entry into the Draw Down raffle, dinner (Catering by Diann), dessert and all of the beer, wine, pop, water or coffee for the entire evening. You must be 21 to attend. Ticket holders do not need to be present to win in this reverse raffle where the last ticket drawn wins the biggest prize! The evening will be a fast-paced night full of fun, raffles and a silent auction. To purchase tickets, contact Dan Diehl at (815) 901-5547 or email dekalbbandparents@gmail.com.

In February DHS band students will conduct their third annual plant sale featuring outstanding offerings from Proven Winners. Students will pre-sell a wide selection of annuals, perennials and shrubs that will be delivered in mid-May. Watch for an announcement on the sale period to purchase the absolute best quality plants in support of the Marching Barbs.
To learn more about any of these fundraisers, contact the DHS Music Department at (815) 754-2120 or email dekalbbandparents@gmail.com.