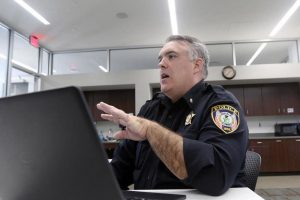 Police Chief Gene Lowery said to know Cmdr. Craig Woodruff, a 20-year veteran of the DeKalb Police Department, is to love him.

“He is an exceptionally intelligent, solid police officer, mentor to many and an exemplary leader who always has his heart in the right place,” Lowery said. “He can take and deliver a joke and always stands at the ready to help someone out or to lead the way. He has been and will always be a friend to all and an advocate for the men and women of our police department and our entire community.”

Woodruff recently was diagnosed with stage 4 colon cancer, and to show that he would not fight this battle alone, the department created a benefit called Backup Has Arrived.

To show support and raise money for Woodruff, a longtime DeKalb resident, and his family during this time, T-shirts and hoodies are being sold through Custom Ink on the benefit’s website.

Net proceeds from shirt sales will go toward the Woodruff Family Children’s Trust, which will provide for the future needs of Woodruff’s children, 3-year-old Oliver and 1-year-old Simon. As of Wednesday, shirt sales raised more than $2,000 for the trust.

Local restaurants will be supporting the event, which will start at
7:30 p.m. Doors open at 6:30 p.m.

Fatty’s Pub and Grill will provide light appetizers and a cash bar at the theater. Attendees also will be able to participate in raffles and buy T-shirts and other merchandise.

Woodruff worked his way up to commander of support services in 2016 after serving as a dispatcher, patrol officer, detective, patrol sergeant and detective sergeant, according to his biography on the Backup Has Arrived website.

Outside of work, Woodruff is a talented tuba player and occasionally has played with the DeKalb Municipal Band and the Kishwaukee Symphony Orchestra. He said music brings balance to his life.

In August, Woodruff visited his doctor complaining of pain in his side and gastrointestinal issues. He initially was diagnosed with diverticulitis, but after weeks of different antibiotics failed to alleviate his symptoms, doctors discovered his colon had perforated.

A 5-inch section of Woodruff’s colon was surgically removed, and in December, he was notified that a pathology test showed he had colon cancer. Subsequent testing showed that it had metastasized to lymph nodes in his neck and abdomen.

Since the diagnosis, Woodruff has undergone chemotherapy.

Woodruff and his wife, Megan, are focusing their efforts on keeping life as normal as possible and are thankful to the DeKalb Police Department for being supportive of Woodruff’s difficult treatment schedule, according to the website.

“He is all business, yet he mixes that business with a smile and a comment or two that always keeps us all on our toes,” Lowery said. “Our police department and our community are better off because of Woody.”

For updates, visit the Backup Has Arrived Facebook page.

*Story courtesy of the Daily Chronicle