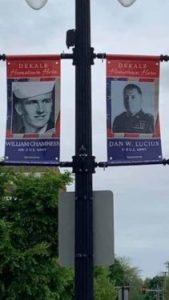 The City of DeKalb has stepped up its game to make DeKalb a place to visit on Memorial Day, as well as honoring Veterans and current military members. On Friday, the Street Department staff led by DeKalb Street Superintendent, Andy Raih, and members of his team placed “DeKalb Hometown Hero” banners on Locust Street from 1st Street to 4th Street. There are 30 “DeKalb Hometown Hero” banners on display and they will remain up until Veteran’s Day (November 11). 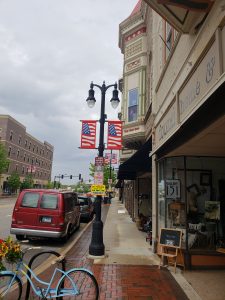 Once the word got out, family members came downtown to see their family member’s banner. Patrick Boyce came to see the banner for his son, John Boyce. Corn Fest Chair, Lisa Angel, came down to see her Father’s banner. She said she loves that she will see him when she’s downtown and at Corn Fest, which he loved coming to every year. Angel is very proud of her Father, William Chamness, Gunner’s Mate 3-U.S. Navy, who passed away in June of 2018.

People visiting Downtown DeKalb on Saturday morning were also pleasantly surprised to see Andy Raih and select members of the DeKalb Street Department putting up American Flag banners on Lincoln Highway and the side streets. Also downtown to offer support was DeKalb City Manager, Bill Nicklas. Mr. Nicklas has been very supportive of the entire Salute to the DeKalb veterans and military families project. 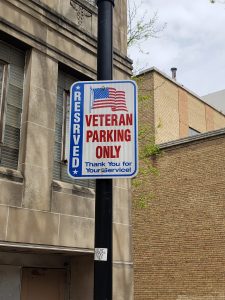 To make veterans and military members feel even more welcomed to DeKalb, there are now two reserved parking spots for Veterans and Military in the downtown area—one on Locust and one on 3rd Street. Local business woman, Carolyn Canon (co-owner of MCR Framing), was excited to see these new efforts. “As a veteran, I am proud that the City of DeKalb is making such a strong effort to acknowledge our veterans and military families,” said Canon.

There are several events planned in DeKalb on Monday, Memorial Day. At 8:15 a.m. at the Memorial Clock at the Corner of First and Lincoln Highway there will be a brief program to acknowledge the “DeKalb Hometown Hero” banner program. Guest speakers will include City of DeKalb Mayor, Jerry Smith (US Army veteran) and City Manager, Bill Nicklas. At 8:30 a.m. in the same location, the DeKalb American Legion Post 66 will have a Honorary Program and Tribute to Memorial Day. At 9:00 a.m., there will be a Parade in the downtown 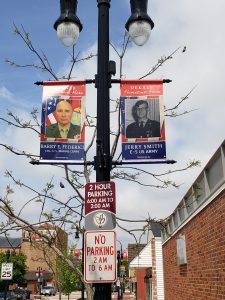 area hosted by the DeKalb Chamber of Commerce. Following the Parade will be a special ceremony at the Ellwood Mansion at 9:30 a.m. Also that morning, Andy Raih promised a special tribute to all the military branches.

The Memorial Day events will kick off at 7:00 a.m. at the DeKalb Elks Lodge, where local Veteran, Frank Beierlotzer, will host a Mayor’s Breakfast.

The “DeKalb Hometown Hero” banners and American Flag program has been a cooperative effort of the DeKalb American Legion Post 66 and the City of DeKalb.