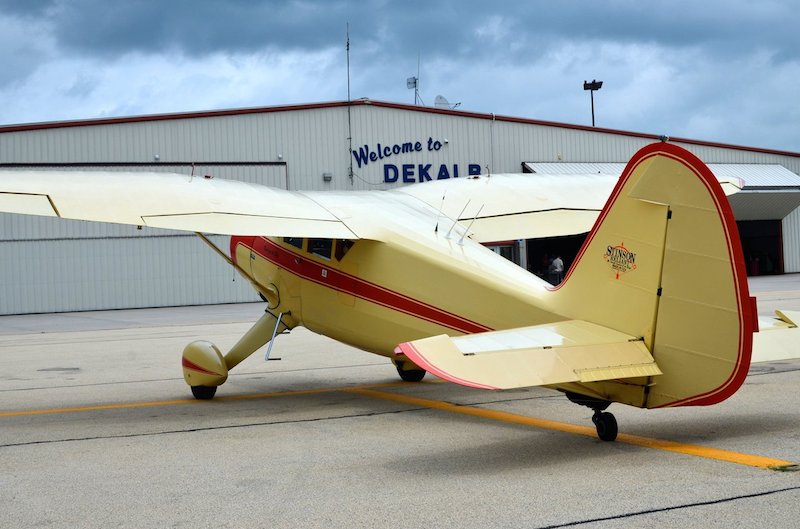 As aircraft began their annual migratory flights toward EAA AirVenture, weather Saturday afternoon, July 18, became threatening between DeKalb Taylor Municipal Airport (KDKB) in Illinois and KOSH, resulted in many aircraft having a three-hour layover at KDKB instead of just a fuel stop.

This Stinson Reliant, which left from Georgia earlier in the morning, was the largest, roomiest, slowest and had the largest GPH fuel burn of all the planes that made a fuel stop at KDKB. Addressing the questions of speed vs. fuel burn, the pilot said, “economy fuel settings is about 14 gph@105-110 mph.”

When asked about the overall size of the Reliant, I was told that it does not fit into a standard size T-Hangar. But boy, it sure is beautiful, inside and out. I would have loved to have had the experience of flying it, if only for 15 minutes or so.

The City of DeKalb provided hot dogs, chips, cookies and very, very cold bottled water for those pilots who stopped at KDKB on their way to KOSH, which is about 125 nm straight north. Fly America provided the grill and hangar space where pilots found relief from the heat of the day and to just take some time to decompress before continuing their trek to KOSH.

The “front porch gang,” like me, added to the friendly atmosphere as stories were shared and questions were answered by the pilots about their airplanes as the weather moved east over lake Michigan. I feel, as the word gets out about the friendliness at KDKB — along with the fuel prices — the line guys are going to become “Top Chef’s” at hot dog grilling!