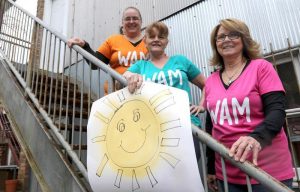 DeKALB – Jana Nowak just wants to get as many people to realize the gem that is downtown DeKalb, and she’s got the perfect upcoming event: a day to showcase regional vendors at DeKalb’s Back Alley Market.

The market, set for 9 a.m. to 3 p.m. Saturday, rain or shine, is the first of its kind. Hosted by the downtown DeKalb merchants group, it will feature vintage, re-purposed and homecrafted goodies for shoppers eager to try new vendors.

Nowak, 58, is the owner of Blu Door Decor, 137 E. Lincoln Highway, a refurbished furniture, clothing and home decor shop. But she said the Back Alley Market, which will be in Palmer Court, the alley between First and Second streets, is about highlighting things people haven’t seen before.

“We’re really excited,” she said. “We’re going to do a boho-gypsy theme, and decorate the alley. It’s something different. We’ve already gotten quite a huge response.”

Nearly 30 vendors from the greater DeKalb area, Chicago suburbs, and even Kentucky have lined up to have booths at the all-day market, which is free and open to the public. Free parking will be available in the lots adjacent to Second Street, Nowak said. Local restaurants also will offer unique Saturday lunch specials during the market, she said.

The downtown merchants group hosts different events each year, and this will be their new spring event. It is sponsored by Kenneth Pietsch of Sycamore-based Crum-Halsted Insurance.

Nowak is one of three downtown vendors co-chairing the Back Alley Market, including Vicki Obermiller, owner of Kids Stuff, and Leslie Conklin, owner of Found. Home and Vintage Marketplace. In total, the members of the merchant group represent a combined 165 years experience, Nowak said, which she added speaks to their support of the city.

Shoppers should come prepared to pay for items with cash or card, since Nowak said the payment option has been left up to the discretion of each vendor, like the farmers market.

*Story provided by The MidWeek