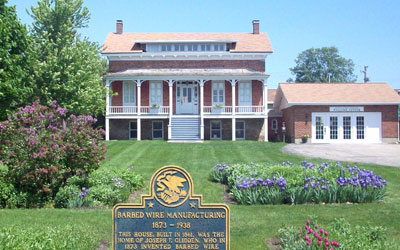 DeKALB – Guests of the Glidden Homestead and Historical Center got the chance to revisit a significant time in DeKalb’s history on Sunday morning.

Sarah Glidden DeMink, a great-niece of Joseph Glidden and a homestead board member, hosted a brunch with biscuits and homemade jam from Peg’s Picks in honor of the railroad’s arrival to the area in 1853. Her husband, Richard DeMink, presented the program following brunch, which taught guests about Joseph Glidden’s involvement with the railroad’s development.

Richard DeMink touched on the railroad’s historic background, which helped in transforming the village of Huntley’s Grove into what is known today as DeKalb – particularly because of the building of the railroad.

“May of 1853 is when they started their first freight train service between Chicago and DeKalb,” DeMink told the group, and who has previously worked for the railroad. He also provided visitors with photos of the first locomotive on the tracks and railroad posters.

Joseph Glidden, a prominent figure in the development of DeKalb, had granted the right of way through his land for the railroad to be built in the early 1850s – believing its construction would serve as a major benefit to the village. While DeKalb has experienced many advances throughout the years, the railroad was the first – and its tracks still remain in the same place today and continue to be used daily.

“The tracks kicked off DeKalb’s growth,” said Rob Glover, executive director of the Glidden Homestead. “There weren’t very many people here before the railroad, but afterward – it was 10 times bigger.

“[Joseph Glidden] was also involved with the county government – I think in learning the process, he could see the whole picture and could see that [the railroad] was the way to go,” Glover said. “Even 20 years later, where they’re saying barbed wire is the big thing that will change the country– the only thing you can really compare that to is the railroad.”

Sunday’s brunch and program were held in the same vein of Lucinda Glidden and her family, who had hosted a breakfast for the railroad building crew back in 1853 to celebrate the new railroad. This year’s program served to remember the expansion and growth that same railroad has helped to bring to DeKalb since then.