Proudly DeKalb is proud to announce the formation of its very own event Street Team! With help from the members of Pi Sigma Epsilon, a professional marketing and sales co-ed fraternity at NIU, the Street Team was formed to capture all of the great moments and events that are happening in the DeKalb community. The Street Team positively engages the community and takes pictures with citizens holding the infamous #ProudlyDeKalb sign, so that they can post all of the moments on social media!

Pi Sigma Epsilon is a nationally recognized business organization that is made up of 70 of the most charismatic and engaging students that NIU has to offer. Looking to get more involved in their service with the DeKalb community, PSE was eager to team up with Proudly DeKalb to make a difference. You may have met these lovely faces first-hand if you attended the Back-To-School-Bash, The First National Challenge, or the Homecoming Parade earlier this school year!

Next up for the Street Team, STEM Fest at the NIU Convocation Center on October 21st and Spooktacular in downtown DeKalb on October 26th. Be sure to come on out and take a picture with this one-of-a-kind team! #ProudlyDeKalb 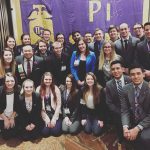 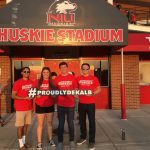 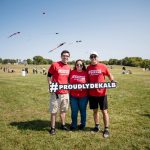