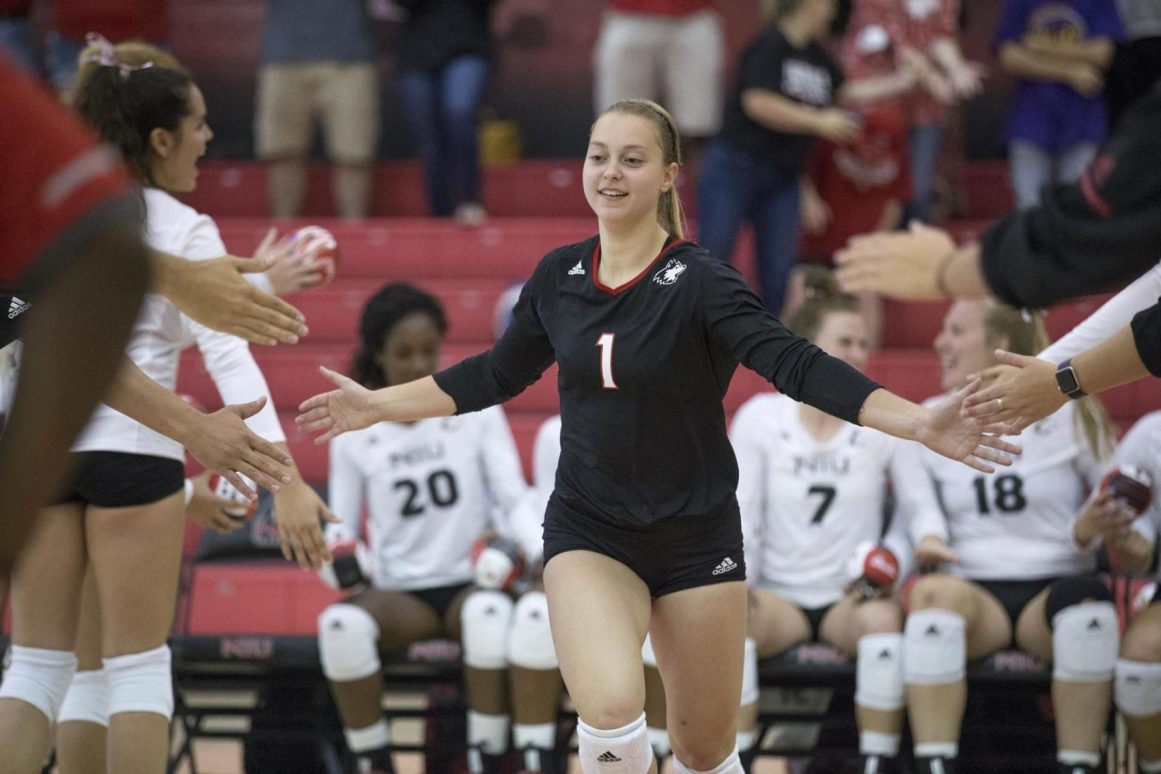 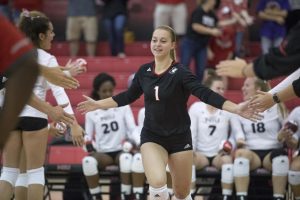 The NIU volleyball team held a Diabetes Awareness Night during the Huskies’ match-up versus the Bowling Green State University Falcons Saturday. The Huskies brought the Juvenile Diabetes Research to the Convocation Center to help educate attendees about the disease.

The JDRF is a global organization funding Type 1 diabetes research. Their mission is to “accelerate life-changing breakthroughs to cure, prevent and treat T1D and its complications”, according to JDRF’s official website. Their website states nearly 1.25 million Americans are living with the disease.

Included in these 1.25 million people who have Type 1 diabetes is sophomore libero Miranda Karlen. She was diagnosed with the disease over two years ago.

Karlen said she not only wants to help inform the public about Type 1 diabetes, but help breakdown stigmas surrounding the disease.

“I think it’s important to know I didn’t do anything to have Type 1 Diabetes,” Karlen said. “I think a lot of times the stigma of the word ‘diabetes’ is you ate too much sugar, you’re too fat or you didn’t exercise enough and that’s not always the case. My body attacked my pancreas, and there’s nothing I could’ve done to prevent it or make it happen.”

Karlen was diagnosed with Type 1 diabetes during her senior year of high school, Nov. 1, 2016. She said she was having symptoms people who suffer from the disease usually experience: she was thirsty all of the time, going to the bathroom more frequently, experienced unusual amounts of hungry and was consistently drowsy.

The two-time First Team All-Rock Valley Conference recipient said her symptoms lasted for nearly six weeks and her mom insisted she get taken to the emergency room. Karlen’s mom picked her up from school and took her to the doctor, where she found out her blood sugar levels were at 502 milligrams per deciliter.

Typical blood sugar levels are between 80-120 mg/Dl, according to Diabetes Daily’s official website.

Karlen said the doctors gave her insulin to lower her blood sugar levels and she began the process of living life with Type 1 diabetes. She said despite knowing the disease was something she could manage, she wondered how it would affect her career as a student-athlete.

“My biggest fear was; I want to go play volleyball, what does that mean for the future of my athletic career?,” Karlen said. “That was one of the first questions we asked when I found out and the doctors really made sure I knew ‘no, you can still be who you want to be, you can still play volleyball and you can do whatever you want, this won’t stop that.’”

The 2016 Evansville High School’s Defensive Player of the Year did not allow the disease to slow down her athletic pursuits. She has played in all 60 matches and has averaged 3.48 digs per set during her two seasons at NIU. Karlen is fifth in the Mid-American Conference with 5.03 digs per set and eighth in service aces in the MAC with 0.32 service aces per set.

In addition to the maintenance non-athletes who have Type 1 diabetes go through everyday to live a healthy life, Karlen said she has to go to extra lengths to regulate her blood sugar levels so she can stay on the court.

This includes checking her blood sugar levels during the middle of the night, while in class and during competitions.

“Type 1 Diabetes is something people don’t realize effects athletes as well as everyday people,” sophomore outside hitter Jori Radtke said. “For her to bring it to our attention, how important it is and how she can still be a student-athlete, a student, a sister, a daughter, I think it’s pretty awesome. We all love and support her and I think tonight was a very important night and I’m very happy it was recognized.”

Karlen said she wants to help raise awareness about the Type 1 diabetes and inspire people to live the life they want despite the disease.

She emailed the coaching staff over the summer about having the Diabetes Awareness Night because it was something she knew would mean a lot to her and while providing the general public with essential knowledge.

The Huskies created a video featuring Karlen along with five other Division I volleyball players to talk about Type 1 diabetes Tuesday.

Karlen said she wants to be someone people can look at and realize disease is not the end all be all.

“I hope she can be a role model,” Head Coach Ray Gooden said. “We’ve seen people who have battled through so many things in so many different ways. What she brings to our team is more than just the volleyball; it’s her the person, the student and it’s her the person that also battles through it and continues to do some really nice things.”

*Story provided by The Northern Star
Written by: Khobi Price