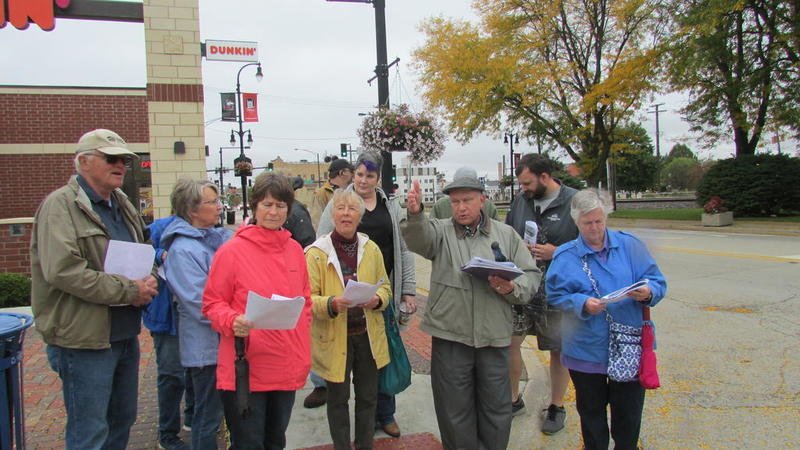 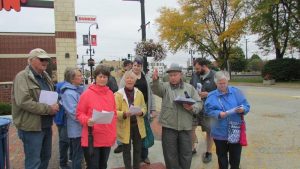 Longtime DeKalb resident Steve Bigolin likes to say that his life is all about local history, and he loves to share his knowledge about DeKalb County’s past with others.

Bigolin, who has given countless tours of the area since the mid-1970s, presented a free architectural walking tour of Lincoln Highway to a small group Saturday afternoon.

The cloudy skies and light drizzle didn’t keep about 12 folks away from learning about the history of the buildings in downtown DeKalb from Fourth Street to Seventh Street.

In July, Bigolin gave a walking tour of Lincoln Highway from First Street to Fourth Street, which he said has more historical buildings that still are standing than the eastern part of the downtown.

“[The eastern] section has lost many more buildings because of redevelopment. The McDonald’s used to be the site of Jacob Haish’s barbed wire factory,” Bigolin said.

Some of the interesting facts that Bigolin shared included the story of “rat row,” which was the area between Fifth and Seventh streets and Girard and Rose streets that was so crowded with houses that it had a rat infestation problem. He told the little-known fact that the designer of DeKalb’s old train depot, Charles Sumner Frost, also designed Chicago’s Navy Pier.

“The Napa Auto Parts building was the site of the A&P Supermarket, which opened in 1941 and was the first full-service grocery store in DeKalb,” he said. “There have been architectural consultants who’ve commented about the beautiful ensemble of late 19th- and early 20th-century buildings in DeKalb.”

DeKalb resident Jim Mitchell has taken many local historical tours with Bigolin in the past, so he was looking forward to Saturday’s tour.

“[Bigolin] is one of our most untapped assets. He knows so much about this history, and I love to learn about history,” he said.

Carol and Barney Schroeder have lived in DeKalb for about 15 years, and said they always are interested in learning more about the town’s history.

“I’m not originally from here, so I always like to learn more, and Steve [Bigolin] is such a treasure of knowledge that I’m interested in what he has to say,” Carol Schroeder said.

Marti Brown of DeKalb has been in DeKalb for 40 years, but still likes learning new facts about the area. She said she doesn’t know much about the history of downtown DeKalb between Fourth and Seventh streets.

“It’s important to learn about the history of the area so we know where we came from, and Steve is an encyclopedia of information, so anything he does I like to tag along and learn from him,” she said.

Bigolin has received a lot of interest in his various tours from DeKalb and Sycamore residents, and he said people like to learn about their communities and the buildings in them.

“[The buildings] reflect the times in which they were built and the businesses that were located in them,” he said. “I’m very interested in the architecture of the period. A lot of what I know is based on hearsay, but that gives you a basis to try to prove or disprove something.”

*Story Provided by the Daily Chronicle