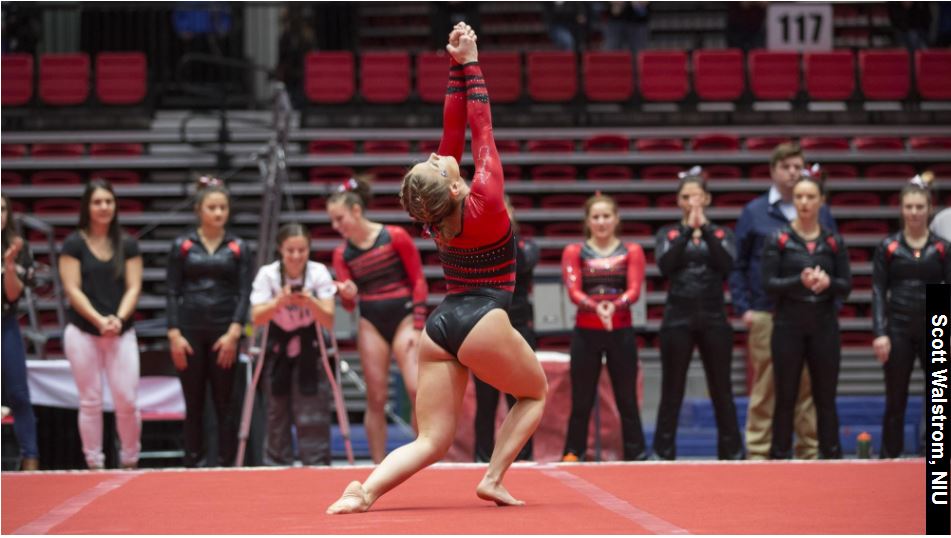 DeKALB, Ill. – Northern Illinois University gymnastics’ junior floor specialist Anna Martucci (Clarkston, Mich./Our Lady of the Lakes) earned a 9.975 on Sunday to record the highest individual score since Margaret Mroz hit a perfect 10.0 on the same event during the 1995 season. The Huskies hit a season high and tied the third highest score in school history with a 195.724 to overcome Western Michigan, who scored 194.400.

“Anna’s pretty average at what she does,” joked NIU gymnastics’ head coach Sam Morreale. “No, Anna’s a rock star! I can’t say it enough. When you get the group in front of her to hit and do what they did, it just sets the table for her, but she has to step up and do it, and she has been. She’s been doing it over and over and over. That part to me is super fun and super encouraging. Whenever you see a judge put up a perfect, that’s pretty great!”

All eyes were on Martucci as she owned the attention in the NIU Convocation Center Arena, anchoring the program’s second-highest floor score in school history with a 49.300. Senior all-around competitor Ashley Potts (Oakwood Hills, Ill./Prairie Ridge) also earned a career-high on the event with a 9.900, while sophomore Allison Richardson (Marysville, Ohio/Marysville) earned a 9.850 to set her top score. Sophomore Amanda Bartemio (Plymouth, Minn./contributed with a 9.800.

Potts rounded out her first-place 39.275 all-around score with a 9.850 on the uneven parallel bars, a 9.800 on vault and a 9.725 on the on the balance beam. She anchored the bars squad to tie for first along with Richardson, who set her career high, and fellow senior all-arounder Katherine Prentice (Indianapolis, Ind./Roncalli).

“If you were to ask Potts what her best event is, it wouldn’t be floor,” laughed Morreale. “That’s not what she’s going to tell you. She’s dangerous! She’s hitting on all cylinders right now, had a couple little beam checks, but other than that, I thought she went after it. She’s an amazing leader. She just puts us in a place to succeed and do well, and the others definitely feed off of her.

“It’s bittersweet when these seniors get to their last home meet of the year, and we’re sending them off,” said NIU head coach Sam Morreale. “Lucky for us, it’s by far, not our last meet. We’ve got a lot to do. We’ve still got a lot left in the tank, and I know they can still score a little higher. We haven’t reached our potential just yet.”

The career highs continued on vault with freshman Gabby Welch (Greenbrier, Tenn./Aaron Academy [Home School]) hitting a 9.775 and Lamberti tying her career best with a 9.825.

The Huskies hit the road next Sunday, March 11 to compete in the Illinois Classic hosted by UIC and will compete against Illinois and Illinois State as well. The meet will begin at 2 p.m. CDT. 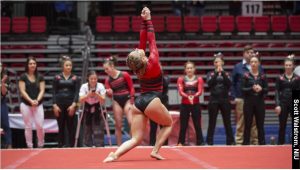