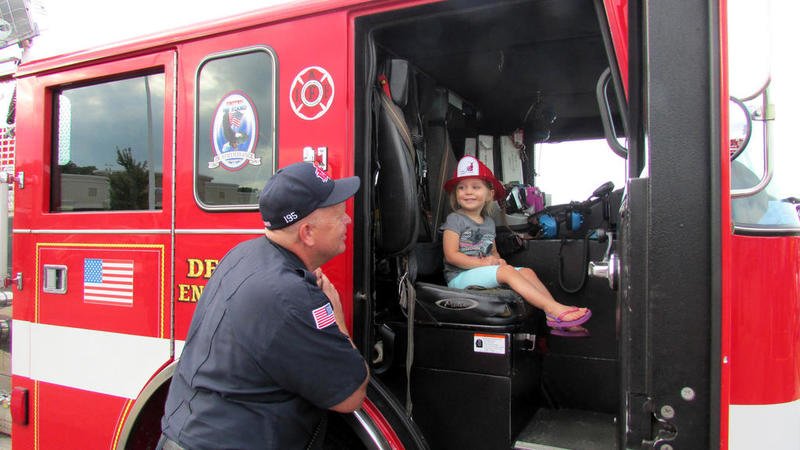 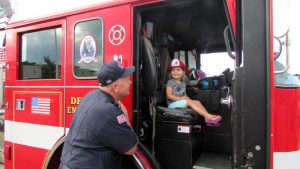 DeKalb, IL  – Kyla Hueber of Sycamore was shopping for school supplies Tuesday evening at Target and was surprised to see a crowd of people gathering around firetrucks and police cars in the parking lot as she left the store. But there wasn’t any trouble at the Sycamore retailer.

Target was the site of National Night Out, a free community event where first responders and other local businesses and organizations mingle with the public in a fun, casual setting. The event is held in communities across the country on the first Tuesday of August every year.

“I’d heard of [National Night Out], but we’ve never come, and I’ve always wanted to check it out,” Hueber said. “What a great community event. It’s awesome for kids to see all these different community members and police and fireman in a positive light.”

Ian Wheeler a Sycamore firefighter was helping children spray a fire hose and said that the event is a fun way to promote health and safety.

“We’re showing children that we’re regular people they can count on for help,” he said. “When people call us, it’s usually the most stressful times in their lives, and it can be scary for children when strangers enter their house.”

DeKalb fire brought its “fire safety house,” which teaches children what to do if there is a fire in their home. Jeff McMaster, deputy fire chief, said he and his crew love coming to the event every year to teach children important safety skills.

“We give kids a brief overview of how smoke acts inside a house and how to get out of a house,” he explained. “Most of the time when we’re in contact with the public, it’s during an emergency, and at events like this, we have the time to talk with people and answer their questions.”

Katrina Dunne of Sycamore and her son, Max Panek, were having fun exploring the vehicles. She said that she believes it’s important for her son to be involved with community events such as National Night Out.

“We try to come to anything like this. He needs to know he’s a part of this community. And it’s nice they have activities and fire safety lessons for the kids,” she said.

Stefanie Horne of Sycamore comes to National Night Out every year with her two children. She said that it’s a “great event that her daughter looks forward to every year.”

“This gets the community together in one place, and it gives kids positive experiences with the police and fire departments,” Horne said.

The DeKalb County Sheriff’s Office had a simulated 911 station where children could dial the number and talk to a real-life operator. Kevin Zimmer’s stepdaughter, Alexis Votaw, 7, was practicing calling the emergency line. The Sycamore resident said that he wanted to bring her to show her the different organizations in the community.

“She can learn about the police and fire departments and what to do in emergencies. It’s great to have all these businesses and groups show up,” he said.

Jeff Wig of the Sycamore police said he always looks forward to National Night Out because it’s a chance for him to relax and have fun with the public.

“We can interact on a one-on-one basis, which is different than what we do on a daily basis,” he said.