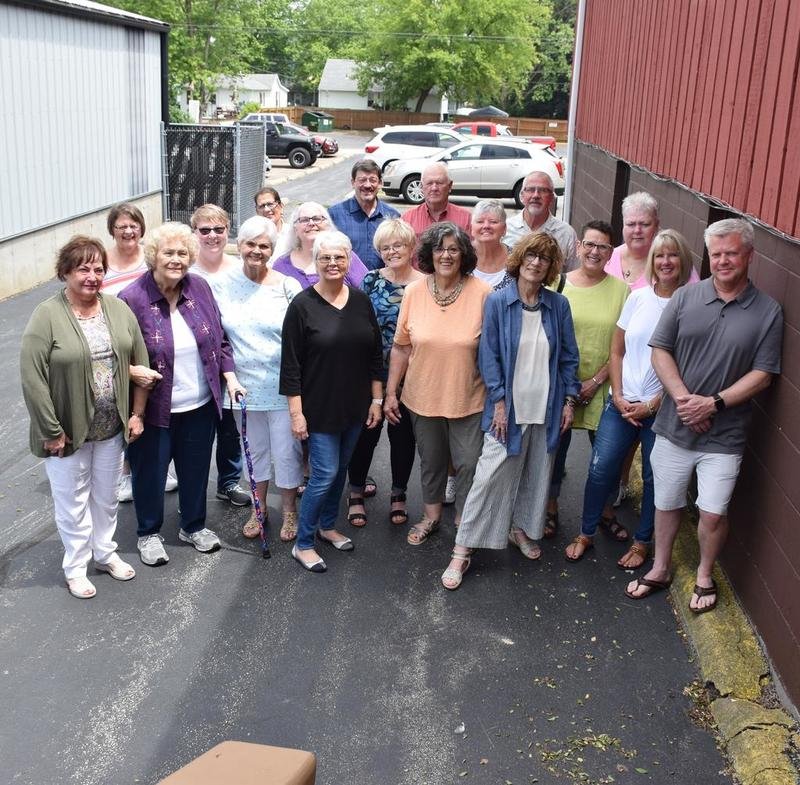 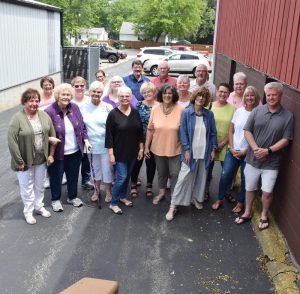 DeKALB – When Sherry (Wiltberger) Meyer, 68, of Michigan attended a reunion last month at Twin Tavern in DeKalb, she saw friends she hadn’t seen in about 50 years.

Meyer was one of the more than 35 children who grew up on Leonard Avenue and Haish Boulevard in DeKalb in the 1950s and 1960s that befriended each other. The children’s families included the Baird, Edwards, Farris, Hiland, Jerde, Helgeson, Homan, Pearson, Perkins, Petros, Perley, Smoltich, Thompson, Voris and Wiltberger families.

On June 23, the “Leonard Avenue Kids” reunited over lunch, sharing stories, photographs and family videos of their childhoods. The friends have kept in touch over the years and created a Facebook group, Childhood Friends of the Leonard Ave. Area.

“It’s so much better than a high school reunion,” Meyer said. “These people were my best friends, we did everything together growing up. We were young children back then, now many of us have grandchildren that age.”

Cindy (Hiland) Dockerty of Ashton, 65, who helped organize the reunion, said what she remembers the most about her childhood was the good times she had with friends.

“We played outdoors all day, we left in the morning and came back in the evening,” Dockerty said. “The mothers all knew who we were, where we were going. There were no worries, it was safe. We were free to roam and have fun all day long.”

It was an era long before video games and cell phones – families had black and white TVs and rotary landline phones.

During summer vacation from school, the children played countless games together outside, including tag; hopscotch; kickball; Mother May I?; Kick the Can; Red Light, Green Light; Annie, Annie Over; and Ghosts in the Graveyard.

They rode their bicycles to downtown DeKalb where they window shopped, stopped at Schimmoler’s Grocery & Market, or enjoyed a cold treat at Professor Popsicle or Prince Ice Cream Castle. Back then, popsicles cost a nickel, ice cream sandwiches a dime and a triple rainbow sherbet cone 12 cents.

“We were always playing outside, even eating lunch at picnic tables,” said Marla (Perkins) Cradduck, 63. “We played at Commercial Body, I remember playing school and having a mock graduation with the old tables and chairs there. We had so much fun together.”

When it was hot out, they played in the creek and pretended to be Tom Sawyer, making rafts as they floated down the Kishwaukee River. In the evenings, they tried to catch lightning bugs and sat and talked on front porches.

“I remember picking wildflowers and playing hide and seek in the field across from my house,” said Becky (Homan) Bidar, 66. “It was a wonderful childhood growing up on Leonard Avenue. I have nine million stories to tell, all good ones of happier times when we were younger.”

The children also were young entrepreneurs, starting lemonade and Kool-Aid stands and performing neighborhood skits in the Wiltbergers’ backyard for family and friends, charging a quarter admission.

When it rained, they stayed inside and played board games, including Monopoly, Sorry!, Clue and Candyland. During the school year, they walked together to and from Glidden School, which was located on South First Street, and walked home for lunch. During the winter, they played in the snow together, went sledding, had snowball fights, built snowmen and were always at each other’s houses.

Bider and Cradduck still live in their childhood homes, and say that Leonard Avenue has changed through the years.

“Kids no longer play outside on the streets like we did, and I know nobody on the street anymore,” Cradduck said. “Nearly everyone has moved away and started their own families.”

“Growing up on Leonard Avenue, we were all very close, everyone knew each other,” Bider said. “There was trust. You could knock on your neighbor’s door to borrow a cup of sugar, drop off extra eggs. It’s not like that now, times are very different.”

Thelma Petros, 88, describes herself as “the mom of the group” and shed happy tears when she reunited with her children’s playmates.

“Leonard Avenue, DeKalb, it was the most wonderful place to raise a family,” Petros said. “We were all friends, all family. The kids were always together, always playing outside. It’s amazing to see that they’ve all stuck together. It’s great to see them all here, together again.”

The reunion also honored friends who have passed away through the years, including Joe Farris, John Hilard, Stevie Perkins, Steve Voris and Barbara Wiltberger.

“We were all so fortunate to grow up where we did, when we did,” said Pat (Hiland) Olson, 67, of Galesburg. “I talk to some of the ‘new’ friends I have now, and they didn’t have the same type of memories I have from my childhood. I wouldn’t change my childhood for the world, because I had the best friends and the best neighborhood anyone could have asked for.”

*story provided by The Midweek: https://bit.ly/2Yd2gu8