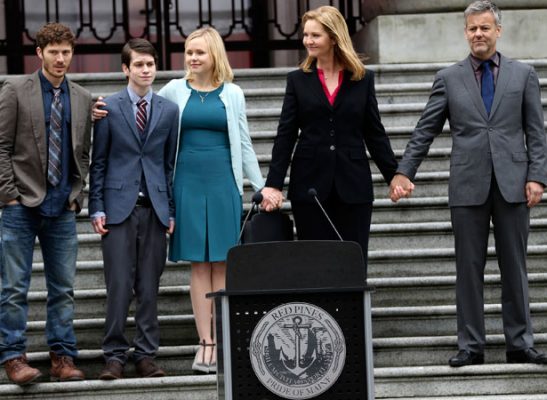 After decades of film work, actress and NIU alumna Joan Allen is relishing the experience of her “kind of, sort of” first television series.

Allen, theatre arts ’89, starred for one season in the HBO series “Luck” and for six episodes of the AMC series “The Killing.” But “The Family,” airing at 8 p.m. CST Sundays on ABC, is the first time she has been part of a series cast from the beginning.

“It’s been a great experience,” she said. “The show is very ensemble driven, and all the actors are terrific. I get to live at home and go to work, which is highly unusual; usually I have to pack a bag and move into a hotel, so that has been great.”

In the show, Allen stars as Claire Warren, the mayor of a fictional town in Maine who has just thrown her hat in the ring for governor. Her family is thrown into turmoil when it is suddenly reunited with Adam, Claire’s son who was abducted 10 years earlier.

“The oldest son is not so sure this is really Adam,” Allen says. “It’s kind of suspenseful and a mystery whether the kid really is part of the family. There’s a mystery surrounding who did it, is this really the kid, and then there are the dynamics of a family that has had something this traumatic happen to them.”

Allen, who won a Tony Award in 1987 for her performance in Lanford Wilson’s “Burn This,” has made more than 30 feature films over the last 30 years. Her work on stage and screen has earned her nominations for three Academy Awards, three Emmy Awards, three Golden Globes and a host of other honors.

The complexity of Claire Warren was one of the things that drew her to television, she said.

“It’s nice to play a complex, three-dimensional woman. I think the kind of stories being told by feature films don’t often have female characters of my age who are juicy,” she said. “I love having the opportunity play a character who is complicated and keeps the audience guessing about what’s going on with her.”

Allen returns to the area regularly to visit family still living in Rochelle. When she visits, she said, she likes to stop in DeKalb for dinner at Rosita’s Mexican Restaurant and to take a drive around campus.

Joan Allen and Liam James star in “The Family.” (Photo used with permission)

“I like to tool around town, see where I used to live. I have a nice connected feeling to the time I was there,” she said.

“I felt the atmosphere and the people and the teachers were very well grounded, and I felt like they really cared about the students. That’s the sense I got when I was there, and I really appreciated it.”

One of Allen’s favorite memories of NIU was taking shorthand classes in the College of Business.

Between her junior and senior year, she spent the summer acting with the Steppenwolf theater company in Chicago, and learned that most of the actors – all young and most recently graduated – held down day jobs to pay the bills while their acting careers got off the ground.

“I thought, ‘I need to have a skill to support myself,’ and my parents, being the good Midwesterners they were, said, ‘You need something to fall back on.’ So I took typing and shorthand. It actually turned out well,” she said.

“All through my 20s, I had a full-time day job as a secretary at a company in Evanston. It kept a roof over my head and food on the table as I was learning the craft.”

Today, Allen is a far cry from taking shorthand to make ends meet. “The Family” premiered in March, and the twisting plot has already created a lot of buzz.

“The Family” airs Sundays on ABC. (Photo used with permission)