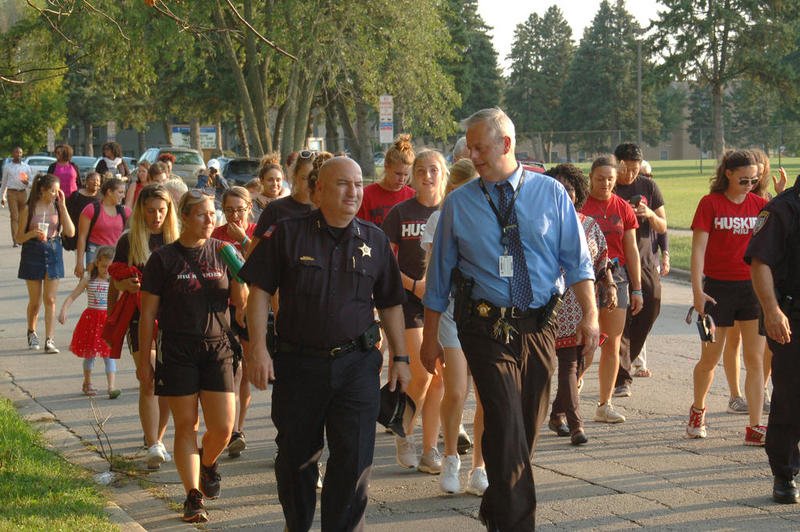 DeKALB – New Hope Church senior pastor Joe Mitchell said he remembers a lot of unrest across the U.S. after protests in Missouri over the death of Ferguson resident Michael Brown, who was shot and killed by a police officer, five years ago. Mitchell said he noticed that the only time there was no violence during the Ferguson protests was when law enforcement and protestors marched together.

That got Mitchell thinking, he said, that he, DeKalb Police Chief Gene Lowery and Northern Illinois University Police Chief Tom Phillips should create an annual event that encourages people to talk to each other and build that kind of coalition within the community.

“Events like this can help bring down that wall,” Mitchell said.

More than 100 NIU and DeKalb-area community members participated in the fifth-annual Unity Walk on Thursday. The walk is hosted by the university’s police department and the DeKalb Police Department, as well as community leaders – including representatives of NIU, Kishwaukee College and DeKalb High School.

The event opened with remarks from community leaders, including newly appointed NIU President Lisa Freeman and Kishwaukee College President Laurie Borowicz in the MLK Commons outside of the NIU Holmes Student Center. Participants took part in a mile-long walk near campus, which went from the MLK Commons up Normal Drive to Lucinda Avenue before eventually circling back to the commons, followed by a roundtable discussion afterward in the student center.

Mitchell, a DeKalb resident, said about 50 people came to the inaugural walk in 2014. Since then, he said, the event has grown to become more of an NIU event, since it aligns with the university’s efforts to strengthen unity across campus and the surrounding community.

NIU student Amber Rodriguez, 19, of Romeoville, said she participated in the walk with her teammates on the university’s softball team. She said she thinks creating a sense of unity by participating in events such as the Unity Walk is important on a college campus, especially with NIU’s being so diverse.

“Taking that physical step in doing it together will hopefully help and reach across campus,” Rodriguez said.

Mitchell said he expects to take a step back from planning the event after this year but plans on participating in the walk in future years.

“It’s got legs; it’s grown, and I think it can walk on its own,” Mitchell said.