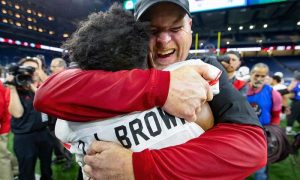 On Friday, Childers showed what Northern Illinois has been saying all year – that the offense is capable of scoring in bunches.

Childers delivered the drive of a lifetime, culminating in his rollout, 35-yard touchdown pass to D.J. Brown with 1:09 to go as the Huskies claimed their fourth Mid-American Conference title in a 19-point comeback win, 30-29.

“We knew it was going to happen at some point,” Brown said. “I’m just glad it happened now. I feel like the offense all year everybody has been questioning it, but like Coach Carey said, we’ve seen it in practice a number of times. For it to come tonight was big.”

It was the only time in the game the Huskies led, as NIU (8-4) had trouble stopping the Bulls early. Buffalo (10-3) scored on its first five drives and led, 29-10, in the third quarter with the ball after Childers was intercepted by Tatum Slack.

Childers threw four touchdown passes and only one interception. 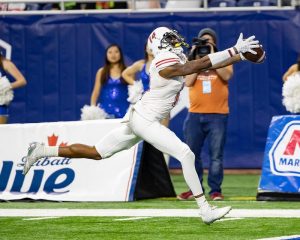 Carey said he’s been waiting for a performance like that all season out of the sophomore quarterback.

“It has been hard, but now, I finally have the platform I can say it,” Carey said. “I’ve been seeing this in practice, and I just haven’t seen it on the game field to the extent that it’s there and you saw it tonight. And it wasn’t perfect tonight by no stretch. It was certainly explosive, and it was certainly what I had been seeing in practice. I know probably people questioned me on it, thought I was crazy, but people finally saw it tonight.”

NIU started its comeback with a 28-yard connection from Childers to Brown over the Buffalo defense to cut NIU’s deficit to 29-17 with 17 seconds remaining in the third quarter.