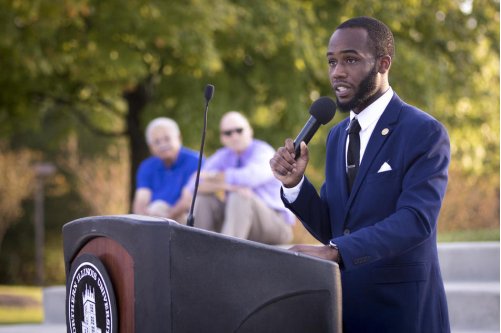 DeKALB – When Amirius Clinton arrived on the Northern Illinois University campus in 2013 to start his freshman year, he said two things stood out for him: a sizable campus and city police presence, and the absence of an advocacy organization.

Coming from Chicago, a city he knew to have controversial police-community relations, Clinton said what he saw at NIU made him a bit uneasy. It became his call to action.

“When I got here, I felt like, as the African-American community, we didn’t have any security – that secure organization that’s going to make sure our rights would be uplifted and held to a standard,” said Clinton, who is now 21. “That was an issue for me.”

By the end of his freshman year, he was laying groundwork to reconstitute the student chapter of the National Association for the Advancement of Colored People, a prominent and long-standing organization that has provided advocacy during some of the most tumultuous times in this nation’s history.

The organization has, in recent years, drawn criticism about whether it is relevant today.

In 2015, at the start of Clinton’s junior year, the NIU NAACP chapter received its official charter from the national one. Now, the student civil rights organization is up and running.

“The importance of a student NAACP chapter is to uphold the national standards of the NAACP,” said Clinton, who serves as president, “which is always securing and making sure people’s rights are being upheld.”

This isn’t the first student NAACP chapter on the NIU campus, although Clinton and others at the university are hard-pressed to recall what happened to the previous one.

But for the political science major, that’s all in the past, and he’s forging ahead with making this iteration of the organization one he hopes will be enduring.

While the chapter will be based on campus, Clinton said it also would be the only civil rights organization of its kind in the DeKalb area.

“That forces us to also deal with citywide issues,” Clinton said.

Among them, he said, he would like to see NAACP members involved with Camp Power, the popular summer camp and mentoring program designed for the residents of the city’s University Village housing community.

The diversity of not only the NIU student body but also other entities within DeKalb makes having a local civil rights advocacy organization significant, said community leaders such as the Rev. Joseph Mitchell, pastor of New Hope Missionary Baptist Church.

Similarly, most DeKalb residents are white (74 percent), according to the 2010 census. But the percentage of black (12 percent) and Hispanic (13 percent) residents continues to grow. Additionally, more than a quarter of the DeKalb public school students are minorities.

“For the young people to get involved with [NAACP], from a social justice standpoint and from a community standpoint, is big,” Mitchell said. “The fact that they want to be part of the community at large, to make this community better, is nothing but good.”

NIU officials tout Clinton’s effort and the organization itself.

“The positive impact of having an NAACP chapter centers around allowing students to have an alternative means by which to express their commitment to social justice issues,” said Gina Flynn, director of the NIU Center for Black Studies.

She said some students could find reassurance with the 107-year-old national organization’s legacy of activism.

NIU’s student chapter is expected to be a voice for students and stand in the vanguard on social issues, campus and communitywide, Clinton said.

One of the current initiatives the organization is pushing is voter registration – with the Nov. 8 presidential election approaching.

Drives are planned to sign up students and area residents to vote, as well as push a get-out-the-vote message.

The NIU NAACP would partner with other student organizations that represent students of various faiths, ethnicities and backgrounds, Clinton said.