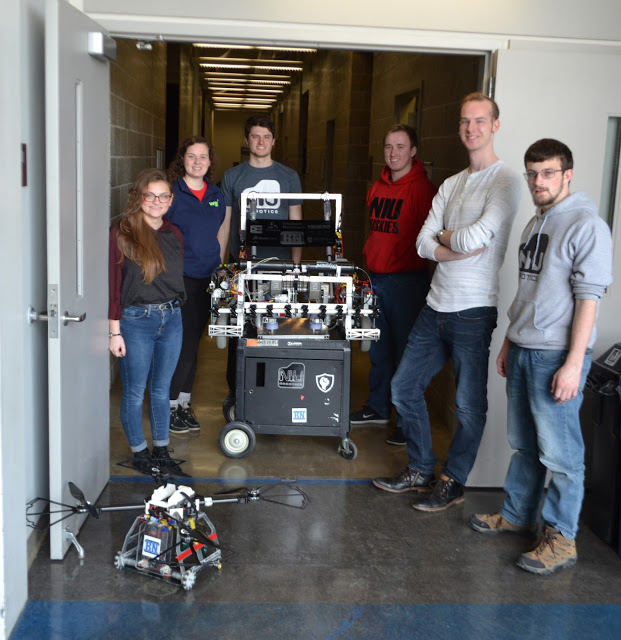 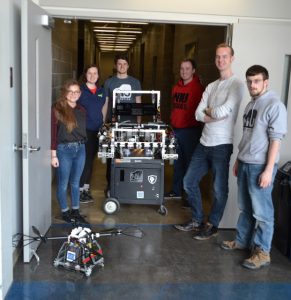 The NIU Robotics team is flying high after securing its first-ever first-place finish at the Midwestern Robotics Design Competition, beating out such competitors as the University of Illinois and Northwestern.

“I am incredibly proud of NIU Robotics and the hard work that went into this success,” NIU College of Engineering and Engineering Technology Dean Donald Peterson said. “Our students have the vision, skills and work ethic to succeed, and it is gratifying to see that proven on the competition course.”

Nine teams entered a total of 26 robots in the contest, held March 9 and 10 at the University of Illinois Urbana-Champaign. The robots – which included flying machines, remote-controlled vehicles and autonomous devices – had to navigate a course and complete a series of tasks that included picking up balls and dropping them into goals to score points.

The NIU team took two robots, its flying quadcopter, QUIN, and its remote-controlled ground vehicle, NIRV. Club president Mary Reinertson said she knew the robots were ready, but she still had some nerves going in to the contest.

“We knew QUIN could fly and we knew it could grab the balls, but we weren’t sure if it would be able to pick them up,” she said. “It’s harder for aerial robots to do certain tasks on the course than ground robots, which is why so few teams bring aerials.”

QUIN did not disappoint; the quadcopter took home first place and NIRV made it to the semifinals.

“It kind of feels full circle, because NIU Robotics started five years ago, and the first robot they started with was a quadcopter,” team member Hannah Higgins said. “Every year since then, every team has had an iteration of a quadcopter. It’s the first type of bot the club ever made and also the first bot to win.”

The team was hoping to build on its success from last year, when it made the semifinals for the first time. But this year’s NIRV was almost completely overhauled, with essentially everything but the wheels built new, so there was no telling how it would compete.

“After each round I kept turning to people and saying, ‘You know, we could win,’” team member Joel Rushton said.

NIU Robotics’ members are confident the team will continue to find success. At least half the team’s members are freshmen and sophomores who can return and apply this year’s lessons to next year’s bots.

NIU Robotics is one of more than 20 engineering-focused student organizations in the NIU College of Engineering and Engineering Technology. The groups offer NIU students hands-on opportunities to put their education into practice. Students work in state-of-the-art labs and are mentored by world-class faculty. Learn more at www.niu.edu/ceet.