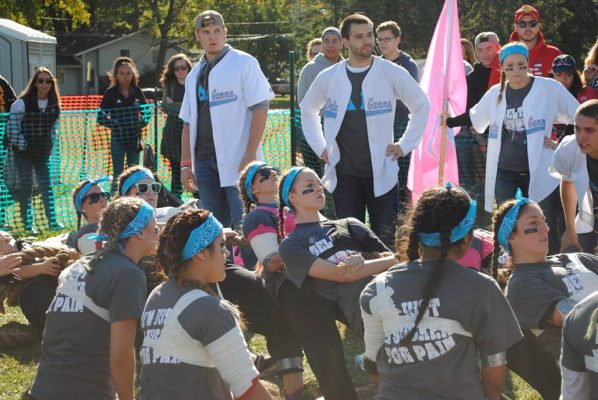 Recently in DeKalb, a very exciting and well-known event took place at the University Plaza Back Fields: 2016 Northern Illinois Woman’s Tugs! Woman’s Tug’s is an event hosted by the PanHellenic Council for participating sororities and over the years, it has become a highly anticipated competition that many students look forward too.

On Friday, October 7th, the games began with Delta Gamma vs. Alpha Delta Pi for match one, Sigma Kappa vs. Alpha Phi Omega match two, Delta Zeta vs. Alpha Phi match three, and lastly Alpha Sigma Alpha vs. Sigma Sigma Sigma for match four. Each of these matches welcomed in anxious crowds filled with students, parents, and alumni, all supporting their favored teams and their children. On Saturday, October 8th, the excitement intensified when the play off rounds begun and the championship match was finally played after weeks of long practices and dedication from the tuggers.

Tons of excited students, each supporting different Greek letters scattered through the crowd, holding up posters for their teams, and cheering loudly for the tugging ladies! After the many tough, hard-fought battles and matches, Delta Zeta took home 1st place for their 10th year of victory in a row, followed by Sigma Kappa in 2nd place, Alpha Sigma Alpha in 3rd place and Delta Gamma in 4th to conclude the weekend. Northern Illinois tuggers and students showed great sportsmanship and fellowship all throughout Woman’s Tugs weekend, making it a truly welcoming and fun experience to be apart of. Now that Woman’s Tugs is officially over, let the countdown begin to Men’s Tugs in April 2017!