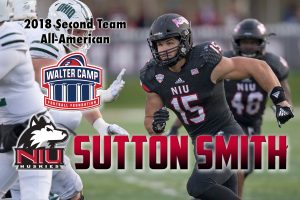 DEKALB, Ill. – For the second consecutive season, Northern Illinois University defensive end Sutton Smith was honored as a Walter Camp All-American, when the Huskie junior was named to the organization’s second team Thursday.

Smith, who became the first Huskie to earn first team All-America honors in back-to-back years when he was named first team All-America by SI.com Wednesday, leads the Football Bowl Subdivision in sacks with a school-record 15 and is second in the country in tackles for loss with 24.5. The Huskie junior was a first-team selection by Walter Camp last year and is the only player from the Mid-American Conference on either the first or second team in 2018.

The 2018 Vern Smith Award winner (MAC MVP), Smith led an NIU defense that set the school record for team sacks in a season with 50. In addition to his ability to stop opposing offenses, Smith, who earned MAC Defensive Player of the Year honors for the second-consecutive year, also scored a pair of touchdowns in 2018. His first came after he blocked his second punt of the year in NIU’s win over Toledo, while his second, an 85-yard fumble return for a TD, came at Western Michigan.

A native of St. Charles, Mo., Smith ranks third on NIU’s all-time sacks list with 30, while his 56 career tackles for loss ranks second to Larry English, who amassed 63 in his four-year career at NIU. English is also NIU’s all-time sack leader with 31.5.

In addition to the Walter Camp and SI.com All-America teams, Smith was also named a second team All-American by PFF (Pro Football Focus).

Smith and the Huskies will face UAB in the 2018 Cheribundi Boca Raton Bowl on Tuesday, Dec. 18 at FAU Stadium. The game will be televised by ESPN at 6 p.m. CT. Tickets are available on NIUHuskies.com.