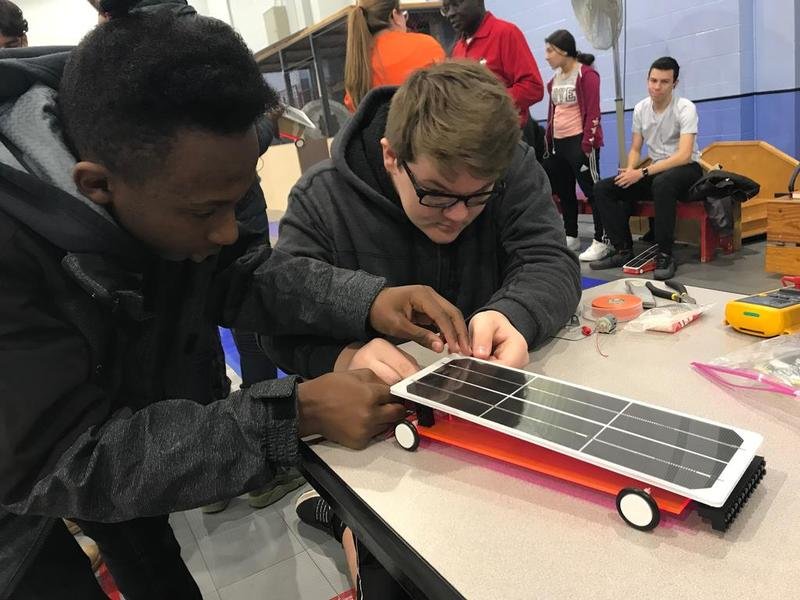 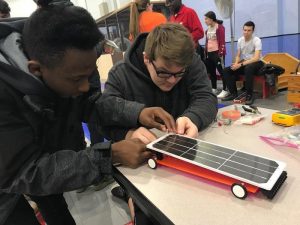 Her teammate, Yuliana Sanchez, 15, said the best part about the experience was “working together as a team.”

Students from DeKalb, Sycamore and Belvidere North high schools participated in a solar-powered car competition in Anderson Hall on the NIU campus as part of an interactive program to promote interest in science, technology, engineering and math careers.

The Interactive Virtual Laboratory, sponsored by a grant from the National Science Foundation, hosted students as part of a program called “Using Renewable Energy, Experiments to Enhance Student Engagement in STEM.” The program, in its third year, is spearheaded by professor Andrew Otieno of NIU’s engineering department and runs once a semester.

The high school students spent the past two weeks building their own miniature versions of solar-powered cars and engaged in a friendly competition to see whose car could run the fastest when powered by simulated sunlight.

Throughout the two-week building process, students had a chance to learn from and be mentored by Otieno and a number of electrical and mechanical engineering graduate students at NIU.

DeKalb High School boasted the most participants with 29 students, who are taking the environmental studies course that also is a dual language program.

During the weeks leading up to the competition, students were given identical car kits but little instruction, which is intentional, Otieno said.

“It’s exciting to see students do something meaningful, something they enjoy, and know that they’re learning,” Otieno said of the challenging process.

Students are encouraged to bring outside materials such as Popsicle sticks or tape to supplement construction.

A group from Sycamore High even used Legos to support the structure of their solar car. Sycamore’s group met a few times a week as part of the after-school engineering club, run by science teacher Sydney Zuhn.

The goal of each solar car was to cross the finish line as quickly as possible when powered by a machine simulating sunlight, Otieno said. Each group was given two rounds to record its fastest time, followed by a final round for the top five groups.

Otieno said there will be a second opportunity in the spring for local schools to participate in the renewable energy interactive lab competition.

He expressed his enthusiasm and said working with students is “really [his] passion.”

*Story provided by the Daily Chronicle
By KELSEY RETTKE