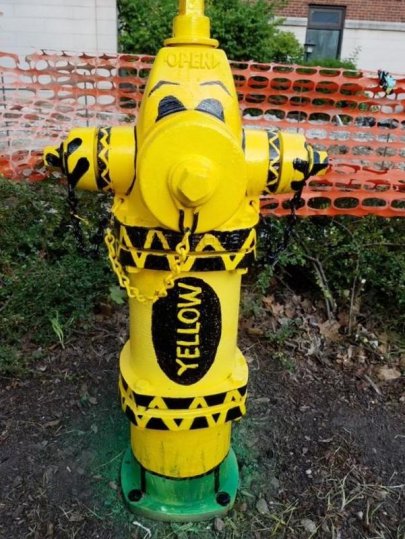 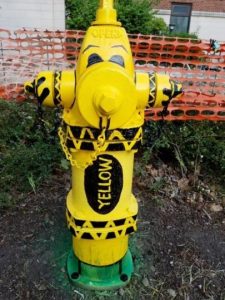 DeKALB – Emily Grobe was spray painting a fire hydrant at the southeast corner of Annie Glidden Road and Lucinda Avenue in DeKalb when she was approached by a police officer.

Grobe wasn’t illegally tagging the fire hydrant, she was participating in the city of DeKalb’s Paint-a-Plug program. Grobe, a junior at Northern Illinois University, painted a sunset scene over mountains on the hydrant for NIU Outdoor Adventures, where she works as a trip leader.

The Paint-a-Plug program is run by the city of DeKalb Citizen’s Community Enhancement Commission.

Through the program, members of the community are permitted to “adopt” a city fire hydrant.

To participate in the Paint-a-Plug program, those interested must download an application and design proposal and email it to PaintaPlug@CityofDeKalb.com. The CCEC and fire department will review applications. If approved, applicants are expected to paint their designated hydrant between April 1 and Nov. 1. After painting the hydrant, artists are asked to take a photo and email it to the city of DeKalb and share it on social media using #ProudlyDeKalb.

Artists also are asked to check on their hydrant throughout the year for touch-ups or maintenance. There is no cost to apply for the program, but artists must supply their own painting supplies.

Grobe said the project took her about three hours and the cost of paint was less than $30.

“It was such a cute way, a small intervention to beautify DeKalb,” Grobe said. “I’d definitely do it again, it was so much fun. It was such an easy thing to do to share art with the community and get the word out about NIU Outdoor Adventures.”

Jason Blumenthal, management analyst with the city of DeKalb and head of the Paint-a-Plug program, said it was started last year as an initiative to have local artists beautify the community.

“It was brought up at a meeting, other towns like Geneva and St. Charles do something similar,” Blumenthal said. “Most fire hydrants are red, excluding yellow and blue ones that are marked for a specific reason, like water pressure. I think that it’s a really cool program. Most people pass by fire hydrants and don’t look at them or think anything of them.”

So far, about five hydrants have been painted and there are about 22 applications in the works.

DeKalb Fire Chief Jeff McMaster said there are about 2,000 fire hydrants in the city of DeKalb. He described the program as a postive, creative example of community pride.

“Painting the fire hydrants adds a special flair to the community,” McMaster said. “It does not affect our operation whatsoever, we know where the hydrants are and where to look for them. The designs that I’ve seen so far have been just phenomenal. It’s just another form of public art that brings enjoyment while you go for a walk or bicycle ride.”

There are no specific themes for the fire hydrants, but artists are encouraged to incorporate different elements of the community or their neighborhood into their art. Completed projects include an Egyptian-themed design in front of the Egyptian Theatre; future designs include an NIU Huskie and R2-D2 from “Star Wars.”

Chris Perkovich, a retired fifth-grade teacher and NIU alumna, was asked to paint three fire hydrants near the DeKalb Public Library after completing other artwork for the library as a volunteer.

“As an artist, I think that it’s a great idea,” Perkovich said. “I love to paint and be creative, and it’s a great way to share my art with others.”

Perkovich painted an ear of corn on the southwest corner of North Third and Oak streets in front of the library and a crayon on North Third Street behind the library by First Lutheran Church. Later this week, she will start working on a Cat in the Hat-themed fire hydrant in the library’s parking lot.

“Every fire hydrant can have a different design inspired by the artist and the location,” Perkovich said. “You can decide if you want to use the fire hydrant’s shape as an aspect of the design, you can choose the theme and colors. Every fire hydrant will be a unique and fun artistic addition to DeKalb.”

The city encourages current residents, former Huskies, students and faculty of DeKalb School District 428, employees of DeKalb businesses or any outside artists to participate. The program is not limited to current DeKalb residents.

Blumenthal said the fun of the program is that “it’s free and anyone can participate.” Children can paint a plug with a parent’s permission and supervision.

“The program is just beginning, we’re excited to see where it goes,” Blumenthal said. “It’s great if we can do all of the fire hydrants. We’ll take as many applications as we can get, there’s no cap. The best part of the program is that it’s public art. It’s the community making their downtown a destination.”

*Story provided by The MidWeek: https://bit.ly/2yQGJc8