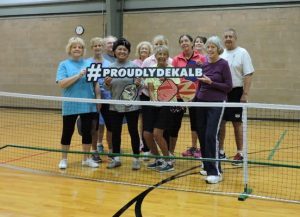 It’s fun just to say pickleball, now imagine how fun it is to play!  Invented in 1965 as a makeshift sport between family and friends, Pickleball has evolved into one of the fastest growing sports and recreation activities in the country.

Pickleball combines elements of tennis and ping-pong using paddles and plastic whiffle balls.  It is played on a court similar in size to badminton with a net like that of tennis.

While played by people of all ages, there is less terrain to cover, making it appealing to former tennis players and active seniors.  Pickleball courts and leagues are a fixture in many senior communities throughout the country.

Pickleball enthusiasts take to the court on Tuesday, Thursday, and Sunday mornings and play with different partners each match.  When the group was asked to describe their pickleball experience, responses could be summed up as “fast, fun, nonstop action”.  They are excited to grow participation and are welcoming to new participants.  Those looking to learn more about the program should visit www.dekalbparkdistrict.com.