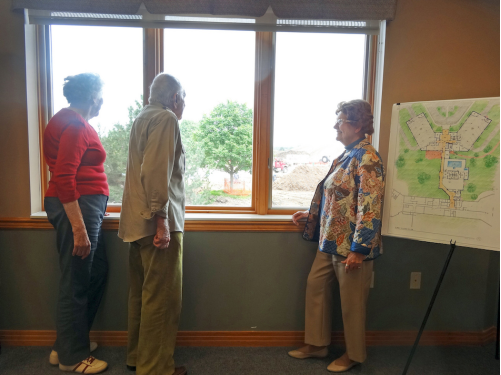 DeKALB – Most people don’t have the stamina or diligence to go to the gym regularly, but 84-year-old Sally Stevens of DeKalb exercises at least five times a week.

“I exercise all the time,” Stevens said. “I use weights and stationary bicycles regularly, as well as working on my motion and balance. Balance is my favorite. I can stand on one foot for a long time.”

Stevens has lived in Oak Crest DeKalb Area Retirement Center, 2944 Greenwood Acres Drive in DeKalb, since 1992. Stevens looks forward to the new expansion at Oak Crest, which has two main parts: a wing for residential units and offices and a wellness corridor for the center’s fitness program.

“We have so many services to offer, including house maintenance, cleaning services and dining services,” Hoppenworth said. “It also gives people a sense of future security. It’s an opportunity for people who like to plan ahead, as well as giving a social aspect and a sense of community to the residents.”

Construction started on the approximately 70,000-square-foot expansion project in early May. The project is expected to be completed in September 2016.

“We started discussing an expansion four-and-a-half years ago,” Executive Director Stephen Cichy said. “We looked into trends and talked to people from around the community. At least a year-and-a-half ago, we started to work with an architectural firm to develop a concept. Last fall, the concept was finished. A lot of thought went into making a preliminary plan from the general concept.”

Oak Crest has been working with four local banks, The National Bank & Trust Co., Castle Bank, American Midwest Bank and Resource Bank, to purchase tax-exempt bonds through the city of DeKalb. The expansion will cost an estimated $14 million.

“The larger units reflect what we see in society as a whole: how people want more living space,” Cichy said. “The expansion will meet current and future demand for larger units, as well as add a 3,000-square-foot larger wellness corridor.”

The first floor of the new expansion’s three-story wing will have offices, a common welcoming area, a conference room, a bistro, an elevator bay and indoor heated parking stalls.

“There will also be a connecting corridor on the first floor that will tie into the main existing building,” Cichy said. “That corridor, which we call the wellness corridor, will feature a 20-by-40-foot conference room, a recreational swimming pool with a Jacuzzi, a shower area with lockers and a large exercise area.”

Bill Shearer, 89, has lived at Oak Crest for 11 years. He said he will probably use the new swimming pool in the wellness corridor and looks forward to meeting the residents who will move into the new units.

As part of Oak Crest’s general wellness program, kinesiology students from Northern Illinois University assist residents as part of their practicum experience. The program will be relocated to the new wellness corridor.

“Classes at NIU prepare the students for the hands-on experience they receive here,” Cichy said. “About 87 residents work with a trainer at least three to five days a week, one-on-one. We have more than 80 residents participating in our FitU program and 35 or so students. We have had the FitU program for over 20 years.”

Liz Hoppenworth, director of residential services at Oak Crest, said there are two types of people who are interested in the continuing care retirement community: people who want the services offered and people who need care.

“I love the fact that I have a sense of security and know that I will be taken care of,” Stevens said. “I have friends here, activities to participate in and something fun is always going on. If you want to and are interested, this is the best place in the area to live.”