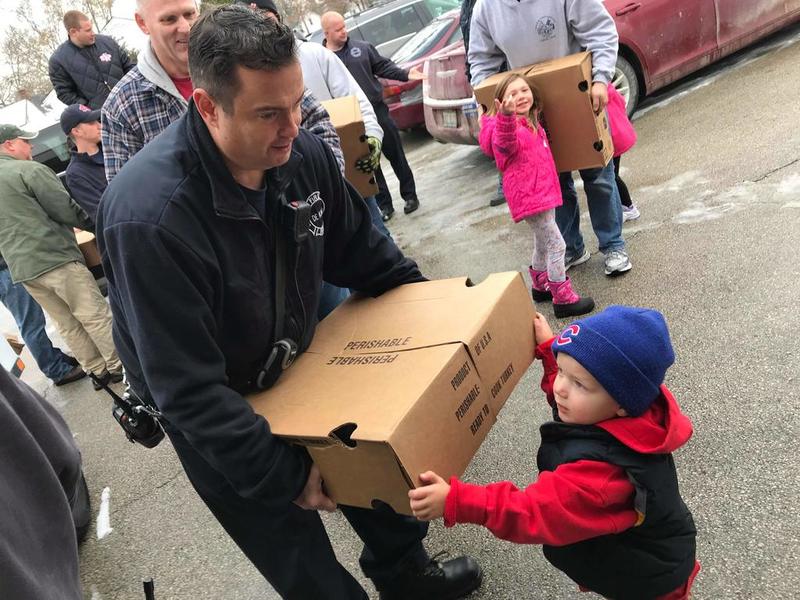 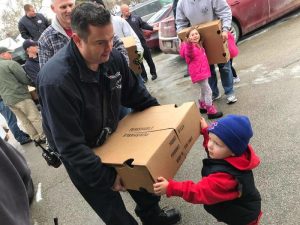 Photos by Kelsey Rettke – krettke@shawmedia.com) (Caption: DeKalb firefighter and paramedic Pat Eriksen, who’s been with the department for 13 years, gets assistance from a future firefighter as they load up turkeys outside Jewel Osco during ‘Let’s Talk Turkey’ day on Friday.)

The department delivered 1,000 pounds of turkeys to the Salvation Army Community Center at 830 Grove St. on Friday morning, to help make sure families in need around DeKalb County get a holiday meal this Thanksgiving. 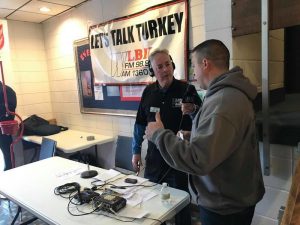 “I think as firefighters, it’s in our nature, we’re here to help the community,” Howieson (shown, right) said in the parking lot of Jewel Osco, 1320 Sycamore Road, as firefighters loaded the birds into a pickup truck Friday morning.

The donation was part of “Let’s Talk Turkey,” a holiday tradition for WLBK, on 98.9 FM and 1360 AM, whose host, TD Ryan (shown, left), broadcasts from The Salvation Army from 6 a.m. to 5 p.m. The DeKalb firefighters’ union has been participating since the 1990s, said Howieson, the union president who has been with the department 18 years.

“These firefighters are great customers of ours,” said Noreen Santelli Jewel Osco’s store director, who’s been with the company 38 years and in DeKalb for a year and a half. “I think it’s wonderful to raise money for meals for the Salvation Army. Those meals get put right back into the community.”

Santelli said the 1,000 pounds of turkeys were bought by the firefighter’s union at a flat rate to be able to donate in large amounts. A group of 20 firefighters formed an assembly line and loaded up the birds, box by box. Howieson said there is never a shortage of guys who want to spend their off-duty time giving back.

*Story provided by The Daily Chronicle