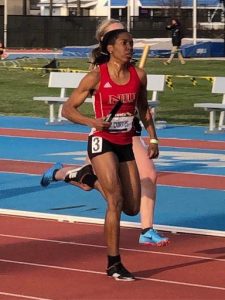 DeKALB — The track & field team is full of young athletes. These underclassmen have contributed top finishes and meet records in their short collegiate careers.
Head Coach Connie Teaberry said she has faith in the team for the coming years as the athletes continue to grow.
“The program right now is very young,” Teaberry said. “We have a lot of talented [first-years] and sophomores, which leads our staff to believe that in the next one or two years those athletes are going to come into their own and be able to really produce on the track.”
Senior Jehvania Whyte is excited for what will become of the team after she graduates.
“There’s a lot of young talent on the team,” Whyte said. “Since I’m a senior, I’m sad I’m not going to be here to bask in their success that’s going to happen when I’m gone.”
One of the athletes who has contributed to this year’s success is sophomore distance runner Mackenzie Callahan. Callahan competed in the 2,000-meter steeplechase and placed second with a time of 7:10.17 minutes at the outdoor season opener, the Black and Gold Invitational.
Since the first meet, Callahan also earned a sixth-place finish with a time of 4:27.07 in the 1,500-meter run to grab her Mid-American Conference-qualifying mark at the Texas Relays.
Callahan said she has seen the growth in her track game.
“[My success so far] makes me really hopeful,” Callahan said. “I feel like I’ve progressed a lot from last season. I’m hoping to have the same progression or more for years to come.”
Another athlete who’s made strong contributions is Mid-American Conference Freshman Track Athlete of the Year and first-year sprinter Taylor Tilmon.

Tilmon helped the 4×400 meter relay team place fourth at the MAC indoor championships with a time of 3:44.93. She placed fourth in the 400-meter dash at the Black and Gold invitational this outdoor season with a time of 56.12 seconds.

Related: Track and Field battles the elements in Iowa City

Tilmon said she is proud of how far she’s come and how well she’s performed on some of the biggest stages.
“I’m really proud of how I did at the indoor MAC championships, getting to finals and winning Freshman of the Year,” Tilmon said. “I really want to see how fast I can get in the future.”
Another highlight of the track season has been first-year Taylor Ramsey. At the Musco Twilight meet last weekend, Ramsey placed first in the high jump with a jump of 1.70 meters.
Ramsey achieved her MAC qualifying mark in the high jump with her 1.70 meter performance, placing second at the Texas State Bobcat Invitational.

Ramsey also took second in the high jump at the Black and Gold Invitational, clearing 1.68 meters. This was just under her season-high of 1.69 meters.

Ramsey said her season got off to a slow start but she continues to set her goals high.

“My season started out rough,” Ramsey said. “The more the season went on, the better I got [as an athlete] and the more I improved. I’m looking forward to winning MAC [in the high jump].”

Multi-event runner Diamond Riley, MAC Indoor Field Freshman of the Year has developed her game in the triple jump.

Riley placed second at the Indoor MAC championships in the triple jump with a leap of 12.63 meters.

Riley said she is ready for what’s to come in the upcoming seasons but is not taking her early accomplishments for granted.

“It’s going to be hard now,” Riley said. “This is what I signed up for. I want to make it to the NCAA championships and I’m proud of becoming Freshman of the Year in the indoor season.”

Whyte, who is finishing up her final season as a NIU track and field athlete, already boasts an impressive resume for the young Huskies to take notice of.

With her track record, Whyte said she wants the next generation of Huskie greats to stay focussed and believe in their coaches.

The future of NIU track and field is filled with young athletes and with the talents of Callahan, Tilmon, Ramsey and Riley, they will hopefully be a strong program for years to come.

*Story provided by the Northern Star