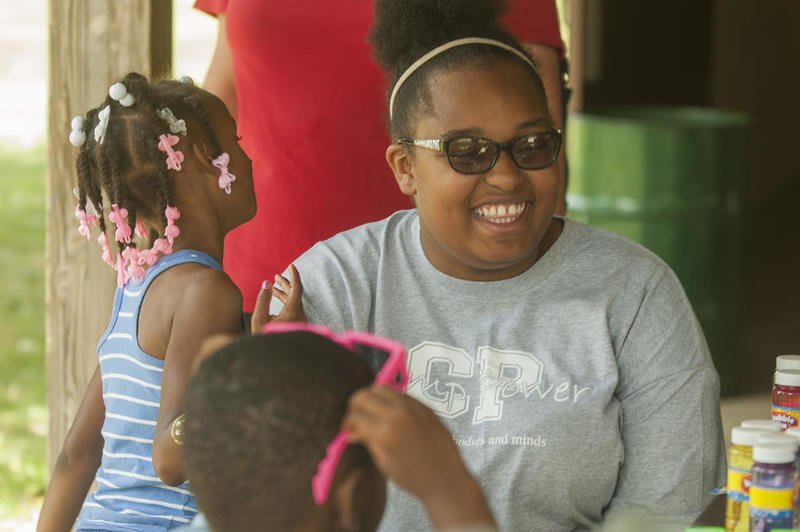 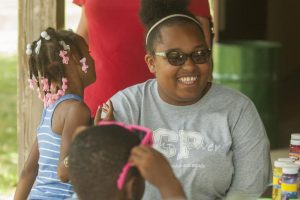 DeKALB – Nine-year-old Cason Wright cheered as he made his way across a slack rope during his last day at Camp Power on Thursday afternoon at Welsh Park.

Wright said he’s been having a lot of fun during the camp this summer and loved having the chance to play football and basketball almost every day. He said he also liked having the opportunity to ride a pony during a Blackberry Farm field trip as part of the camp experience.

But, he said, his favorite part of the program was trying to win prizes during the camp’s carnival-themed last day.

“It’s basically like a real carnival,” Wright said. “You get treats and have fun.”

About 80 kids celebrated the end of summer by cupcake-walking, slack rope-walking, pie-eating and participating in tug of war during the camp’s last day. The day camp, geared toward school-aged children living in University Village, was established by the DeKalb Police Youth in Need Task Force and other community stakeholders to address juvenile crime, poverty and health in the area.

The camp is free for families in the complex because the program is funded entirely by grants and community donations. Camp curriculum includes outdoor play at the beginning of the day, filling up on meals midday and ending the day with more educational activities.

Camp counselor Lisa Cumings, who also is one of the program’s founders, said there was a need for the camp in the area because of the higher crime rate in University Village. Before the camp’s creation, she said, kids were stealing food from nearby shops because they were hungry.

“We don’t want them in trouble,” Cumings said. “We want them engaged.”

DeKalb Police Chief Gene Lowery said in an email that the area has remained stable crimewise, but crime in the city rose significantly in 2016. He said via email that the program is going through some revisions to include more children who live outside the University Village apartment complex.

DeKalb police Detective Aaron Lockhart, who also is the school resource officer for DeKalb schools, has been attending the camp twice a week. He said the camp helps create a bond between the campers and law enforcement so that the kids know that they always can come to police.

“If every area could do this, it’d be great,” Lockhart said.

Crystal Hicks, 32, was helping during the festivitiesThursday while her two children attending the camp played some games before snack time. She said she thinks the camp is great for her kids and appreciates that it gives them something to do all day during the summer.

Hicks said the older of her two children attending the camp, 8-year-old Jaiden, not only gets to do fun things and visit fun places, but she appreciates that her son participates in more academic activities, such as reading, during the camp.

“It keeps his mind going every day,” Hicks said.

And, Cumings said, the camp allows kids from the lower-income area to have similar summer experiences as their peers.

“These kids get to go back to school and say, ‘I went to summer camp,’” Cumings said.