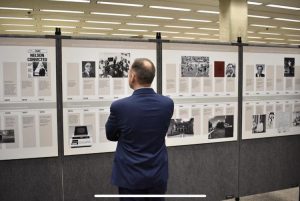 “DeKALB — The NIU community will get to enjoy the 125-year history of the university at the recently unveiled 125th anniversary exhibition Becoming Huskies through December, as part of the university’s year-long celebration.

The opening reception for Becoming Huskies was 5 p.m. Tuesday on the main floor of Founders Memorial Library.

One of the attractions attendees can observe is a timeline consisting of 276 historical facts spanning 23 panels. Among these noteworthy pieces of history are the 1915 graduation of Fanny Ruth Patterson, the first black student to graduate from NIU, the first NIU credit courses offered through TV in 1959 and the football team’s California Bowl appearance in 1983.

The exhibition also features memorabilia gathered from the Regional History Center, including yearbooks, pins, pennants and school gear, and additional panels displaying significant dates and facts regarding NIU properties, including ones “lost to time” such as Kishwaukee Hall, the Arboretum and the Northern Zoo.

In addition to the Regional History Center and University Archives, the information used in the timeline was obtained primarily from Earl Hayter’s “Education in Transition: The History of Northern Illinois University” and Glen Gildemeister’s “Castle on a Hill,” one of the panels read.

Wade Duerkes, photography manager and 125th exhibition execution committee member, gave a speech on the major takeaways from the exhibition.

“It’s about identity, our identity as a campus,” he said. “As you look at the information there, you see we’ve had the name changes, we’ve had the logo changes [and] our mascots have changed over the years. But really what we are as an entity has not changed from the beginning.”

NIU is a community whose members look to the future and play a role in forging a collective identity for the university, and the exhibition allows those unfamiliar with NIU’s history to get a sense of how far back this concept goes and how it applies moving forward, Duerkes said.

“How do you take all of that stuff and put it into a single word about who we are?” he said. “To me, that answer is ‘Huskies.’ That is who we are. That is how we bring that idea together.”

The second takeaway from the exhibition is to continue the preservation of history for the knowledge of future generations, Duerkes said.

“[This is] that call to action,” he said. “The reason we have this up, the reason we know about the Ellwood and the Glidden Society, which was a huge part of the campus, is because they preserved that stuff.”

The Ellwood and Glidden Societies — named for Isaac Ellwood and Joseph Glidden, two of DeKalb’s historic barbed wire entrepreneurs — were two of the first student organizations at what was then called Northern Illinois State Normal School. The event showcased memorabilia linked to the organizations, including pictures, a pennant and a gavel.

Duerkes used NIU Esports, a hub for video game competitions on campus, as an example of something current that ought to be preserved.

“Esports is such a major thing that we’re looking at; it’s so impactful for the students,” he said. “It’s in its very beginning, and we don’t know how that is going to inspire students down the road. So we really want to encourage people to preserve whatever they can.”

Anniversary calendars containing photographs from NIU’s history were available at the event. The calendars were assembled by Dean of Libraries Fred Barnhart and other library staff, with photographs supplied by the University Archives, according to a Jan. 22 NIU Today article.”