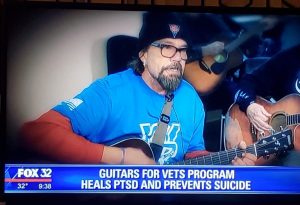 “Local DeKalb (IL) Veteran Marshall Boyle appeared on Chicago’s FOX 32 News as part of a special segment on lifestyles of veterans suffering from PTSD and other emotional challenges from military duty. On the 9:00 PM Tuesday evening news, Fox 32 reported on a local organization that uses guitars as part of helping veterans cope with a variety of challenges.

Guitar 4 Vets uses music to help veterans reconnect with themselves as well as a means to rebuild relationships with other veterans. Guitars 4 Vets is a 501(c)3 non-profit dedicated to providing relief to struggling veterans through the healing power of music and community support. G4V pursues its mission to share the healing power of music by providing free guitar instruction, a new acoustic guitar and a guitar accessory kit in a structured program run by volunteers, primarily through the Department of Veterans Affairs facilities and community-based medical centers.

Between 800,00 to one million of our Military Veterans are afflicted with some type of Post Traumatic Stress Disorder (PTSD). In fact, more soldiers have committed suicide since the Vietnam War than have died in actual battle. Everyday 22 US military veterans commit suicide. But many are finding hope in an unlikely place: behind the wood and strings of an acoustic guitar. The healing power of music helps soldiers and veterans cope with a variety of life’s issues.

“I joined Guitars 4 Vets one-year ago and it has helped me control some of the depression and anxiety that curtailed some of my personal and social life,” said Boyle. “It has forced me to get out of the house and network with others sharing some of the same challenges I have had over the past several years. More important it has given me a creative outlet to experience the enjoyment of music.”

Boyle was born in Aurora (IL) in 1962 and moved to DeKalb in 1967. He received an MBA from Northern Illinois University in DeKalb (IL) in 1995. For several years he was employed as an insurance representative and has been an Ambassador for the DeKalb Chamber of Commerce.

Marshall Boyle now serves as an Ambassador for Guitar4Vets.org. He has worked with a variety of veteran groups and organizations to help promote a better understanding of PTSD. His motto is simple, “it is OK to not be OK, but allow others to help make the journey more liveable without judging”.”