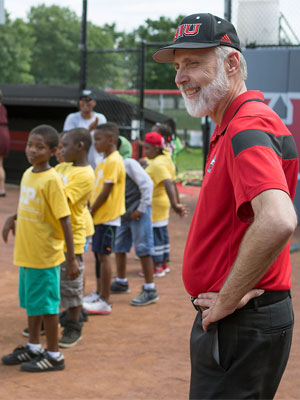 NIU is far more than a resident of the City of DeKalb – we are an engaged and enthusiastic partner in making the city a great destination.

We are woven deeply into the city’s fabric, just as the city is an inseparable part of who we are. Our institution and its hometown are inextricably linked, two drivers of an interrelated social and economic system.

Proof of this vital relationship came July 21 when I spoke at DeKalb’s State of the City event.

I was honored to join Mayor John Rey and City Manager Anne Marie Gaura on the stage at Faranda’s: Since my arrival in 2013, NIU has worked diligently with local government and not-for-profit partners throughout DeKalb County to boost economic development; safety and security; and quality of life.

A thriving community – one of my pillars of Student Career Success – is crucial to our future.

Students want to live and learn in a healthy, flourishing place; it’s something their parents look for as well. That plays into the critical areas of recruitment and retention, quickly becoming our lifeblood while we continue to face reductions in state support.

It is key to have the community play a role on our campus. Did you know that more than 40 local leaders, including the mayor, city manager and police chief, now serve as tour guides while our new parents enjoy bus trips around DeKalb during orientation?

We’ve heard from alumni parents surprised by the positive changes in their long-ago college town. We heard about one couple who are looking into buying a house here after one of the orientation tours. We heard about one mother unsure whether her son should come to NIU; the bus tour – and a conversation with the director of the beautiful and historic Egyptian Theatre – changed her mind. That’s what we like to see.

A strong DeKalb also offers an accessible, hands-on learning environment – vital to our ability to provide engaged learning experiences to our students.

Students in our Community Leadership and Civic Engagement major, for example, gain more than important career preparation through internships. They’re also leaving this town a better place than they found it – a hallmark of this socially conscious generation.

Baker and CLCE major Jessica Sandlund addressed the State of the City.

And hopefully, graduates, once immersed in the local communities, will want to stay and become long-term members of the area. This week, I had a conversation with two NIU police officers who did just that.

Or course, our faculty, staff and future colleagues also desire a good place to call home and raise families.

I’m excited by DeKalb’s new and collaborative strategic planning process, so much so that we are hosting one of the community conversations about it next Monday. You’ll hear more from me in the future about what DeKalb is doing to create a sense of vibrancy and attraction, and how our students will benefit.