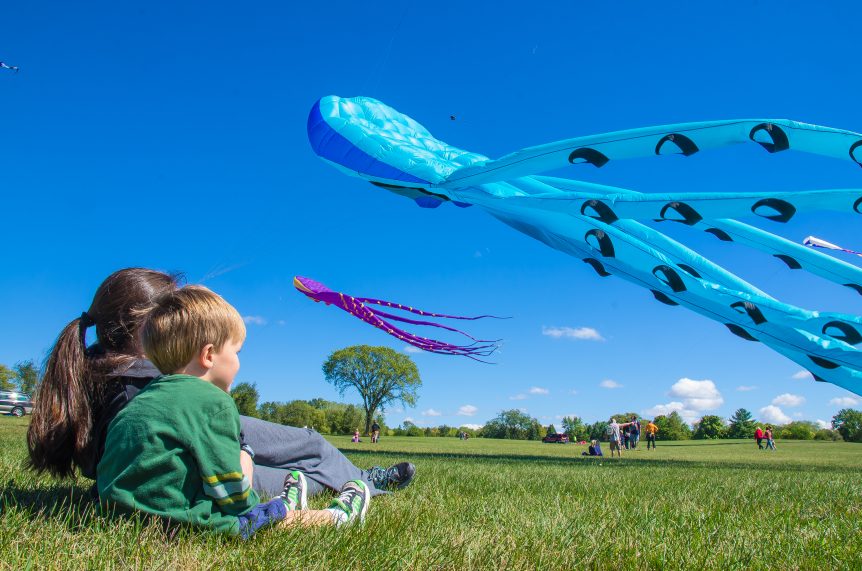 The first DeKalb Kite Fest was held on September 6, 2006.  This amazing event came to be because an 8 year old boy, Nathan Overman wrote a letter to then Mayor Frank Van Buer expressing his desire to bring his love of kiting to his hometown, DeKalb.  According to Nathan, he broke one of his kites and his mom started looking online for ways to repair it.  The Overman family would fly smaller kites in the parks around DeKalb County, so they were already avid kite enthusiasts when they started to attend festivals in other cities.  At these festivals they made friends with various people they met and became part of the kite enthusiast community. They purchased their first four line kite from Dave Zavell and another instant friendship was formed.

Dave Zavell owns and operates Chicago Kite.  Dave, the Overmans and Chuck Siebrasse, Executive Director of the DeKalb Chamber at the time teamed up to bring the first kite festival to DeKalb.  Around 300 people attended that first year.

This year we celebrate the 10th Annual DeKalb Kite Fest.  It has become one of the largest kite festivals in Illinois.   Our bureau organizes the event with Doug Nelson, Kite Fest Chair.  Attendance has grown to average more than 4,000. It draws visitors from surrounding states and the suburbs.

Dave Zavell continues to recruit our kite family, who come every year to share their joy of flying kites with us.  We couldn’t do it without them, our sponsors and the community volunteers.

One of the most anticipated activities is the kite candy drop.  Yes, the candy drops from a kite!  Many of the signature kites are at least 90 feet in length.  We have families and visitors that anxiously await the Second Sunday in September to experience the joy of watching all the beautiful kites flying and dancing over the skies of DeKalb County.

The Overman family continues to be involved with Kite Fest, and the little boy that wrote the letter that set this festival in motion is now a young man. Thank you Nathan for getting us started on this path.  Your love for kiting is still being shared with both new and old friends that come together the Second Sunday in September.