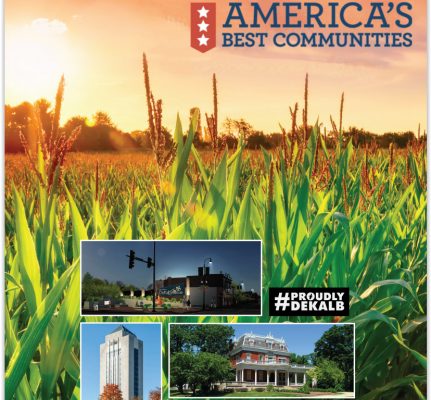 DeKalb, Illinois (March 10, 2016) – The volunteer group Proudly DeKalb, Inc. invites the public to a town hall meeting on Thursday, March 24, 2016 at 7:00 PM at the historic Egyptian Theatre in Downtown DeKalb.  This event is free and open to the public; doors open at 6:30 PM.

Local ABC team members will provide an overview of the America’s Best Communities competition which DeKalb has advanced to the semi-finals in.  The team will also provide an overview of the seven projects submitted in the competition as part of a local revitalization plan.  There will be a question and answer portion moderated by Eric Olson from the Daily-Chronicle.  The Town Hall is scheduled to end by 9:00 PM and will have tables set-up in the lobby afterwards for each of the projects so the community can get more details and sign-up to help.

The purpose of this event is to provide more details to the community on the local revitalization plan submitted for this competition.  But most of all the local volunteers working on this project want further community input and ideas along with providing more people the opportunity to get involved.

Over 350 communities entered the competition and DeKalb was among 50 nationwide that were selected to advance into the quarterfinals.  Each quarterfinalist community was awarded $50,000 to develop a community revitalization plan.  A large group of local volunteers representing many different segments of the community were given six months to work on DeKalb’s plan.

DeKalb submitted its quarterfinalist plan in early November 2015 to the America’s Best Communities selection committee.  DeKalb is now one of 15 nationwide semi-finalists who are advancing to the next phase of the multi-stage three-year competition and is the only community in Illinois remaining in the competition.

DeKalb’s vision submitted for the competition was that: DeKalb is recognized as a 21st century community with a thriving university and a vibrant downtown.  DeKalb’s residents, businesses, government, and university community are engaged in a dynamic interplay of energy and creativity that retains and attracts businesses with living-wage jobs.  DeKalb’s leaders are diverse, visionary, and adaptable, and work together to continue to grow our city.

The local ABC revitalization plan will help guide the growth of the local economy and support improvements to quality of life.  Specifically, it focuses on 7 projects that will create a stronger sense of place, pride and identity along with stepping up economic development efforts.  All of these projects have planning already underway and provide many opportunities for the community to get involved.

As a semi-finalist, the DeKalb ABC Team will send a team of local volunteers to the ABC Summit in Durham, North Carolina in late April where up to eight finalists will be announced and receive $100,000 for the community.  3 communities will be chosen in April 2017 as the three Grand Prize winners and receive $1 million – $3 million, to put towards revitalization efforts for their respective towns.