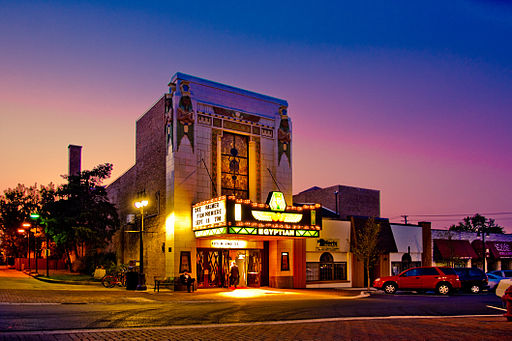 DeKalb, IL – The Egyptian Theatre in Downtown DeKalb is excited to kick off their Classic Film Series this September!

What a better way to celebrate the 90thanniversary of the Egyptian Theatre that with a 9-month celebration of some of the most well-known films over the past 90 years. This special film series will be present on 35MM film on our historic carbon-arc projectors, just as it would have been when these films premiered. Films include: The Wizard of Oz, 2001: A Space Odyssey, E.T., It’s A Wonderful Life, Casablanca, Snow White and the Seven Dwarfs, Gone With the Wind, The Sound of Music, and Raiders of the Lost Ark. This series is sponsored by Thrivent Financial, Gordon Hardware, M&M Welding, Amy & Kevin Mathey, Jill & Andy Hargrave and WTPB-LP FM 99.3.

General admission tickets are $10 with a $2 discount for students and seniors. You can save even more by purchasing package tickets for all the showings as well! Tickets are on sale now online at egyptiantheatre.org, over the phone at 815-758-1225 or at the Egyptian Theatre box office. The Egyptian Theatre located at 135 N. 2nd Street in Downtown DeKalb, IL is owned and operated by Preservation of Egyptian Theatre, Inc. a 501(c)(3) non-profit organization.  Annual support provided by First National Bank, Northwestern Medicine, Shaw Media, and Tapa La Luna.