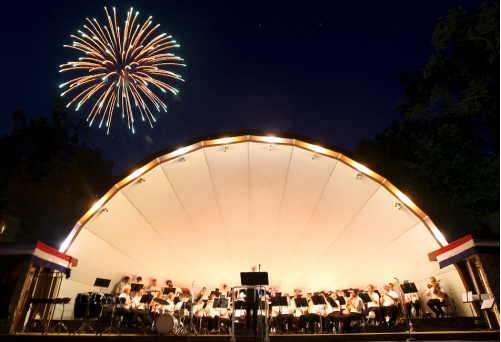 DeKALB – The DeKalb Park District is set to host its annual fireworks show in Hopkins Park on July 4 after the park board approved a contract with fireworks contractor DCV Imports.

The show is co-sponsored by the park district and city of DeKalb at a total cost of $14,000, split between the district and city. Fireworks will last for about 25 minutes and begin at dusk.

Park board members OK’d the deal on Monday.

The annual show is free and open to the public. The DeKalb Municipal Band will perform that evening and the fireworks will go off beyond the band shell, Mangum said.

“We looked at different quotes from additional fireworks vendors,” Mangum said.  … These guys have done it in the past and they really enjoy doing our show. We’re excited to have them,”

The fireworks display typically lasts about 25 minutes for crowds who watch from Hopkins, parking lots along Sycamore Road, and other locations near Hopkins Park.

Food booths from local vendors will be on site in the early afternoon. The DeKalb Municipal Band will perform before and during the fireworks show, which begins at dusk.