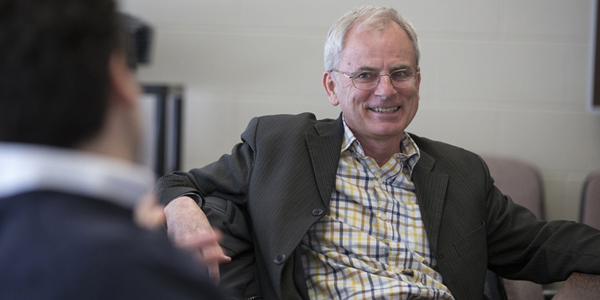 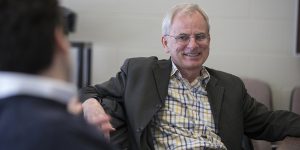 With scarcely a day going by without proposals, protests or headlines surrounding the issue of immigration, Northern Illinois University historyprofessor Aaron Fogleman informs present-day issues by peering deep into the past.

From 1492 to 1870, more than 22 million migrants made their way to the Americas, says Fogleman, who quantified the wave of migration through meticulous research. In many respects, current debates echo those of the past.

“When I listen to contemporary critiques of immigrants, there’s always a sense that we’re experiencing something new,” he says. “But if you look at immigration historically, you find tension in every generation, with people saying immigrants are going to destroy America. That goes back to the Colonial Era. Yet not only does America survive, later, many Americans look back with pride for their immigrant ancestors.”

With funding assistance from NIU faculty-grant programs, Fogleman began work three years ago on a book that aims to breathe new life into voices of migrants from the past who made their way to the Americas. Now his effort is receiving a major boost in the form of a prestigious and highly competitive Guggenheim Fellowship for 2018.

The John Simon Guggenheim Memorial Foundation ran a full-page ad earlier this month in the New York Times announcing the fellowship recipients. Fogleman is among 173 artists, scholars and scientists selected for the award from nearly 3,000 applicants. He was one of only three U.S. historians named as Fellows.

“Winning a Guggenheim is one of the highest honors a historian can achieve,” says Jim Schmidt, chair of the NIU Department of History. “We are incredibly proud of Aaron.”

Guggenheim Fellows are appointed on the basis of distinguished achievement and exceptional promise for future accomplishment.

Since its establishment in 1925, the Guggenheim Memorial Foundation has granted more than $360 million in Fellowships to over 18,000 individuals, among whom are scores of Nobel laureates, Fields Medalists, poets laureate and winners of the Pulitzer Prize, National Book Awards and other internationally recognized honors.

As a Fellow, Fogleman will receive funding for a year, as well as time off from his teaching and other duties. He’ll use the time and funding to focus on his research from his home in Batavia.

A Presidential Research Professor at NIU, Fogleman is already well known among scholars for his work addressing the themes of transatlantic migration, gender, religion and revolution from 1492 to 1867.

He has published his research in top journals in the field and penned three highly regarded books, including his 2013 work, “Two Troubled Souls,” which traced the lives of a married couple who, as missionaries and religious seekers, traveled Europe, the Caribbean and North America during the 18th century. The work received the American Historical Association’s 2014 James Rawley Prize, which honors the best book exploring the integration of Atlantic worlds before the 20th century.

The project investigates hundreds of English, Irish, German, Spanish and other European immigrant voices, discovered in letters, diaries and memoirs from the Americas, as well as more than 160 narratives of enslaved Africans.

Of the more than 22 million migrants over four centuries, well over 10 million were enslaved Africans. Others also were among the “unfree,” including more than 50,000 convicts that the British sent to North America during the 18th century and nearly 600,000 indentured servants, mostly from Britain, Ireland and Germany.

“Related to the concepts of freedom and unfreedom, I’m also examining the different gender experiences,” Fogleman says. “We associate Europeans coming to the Americas for freedom and opportunity, but that view has a heavy male bias. Many women didn’t want to go, and for these women, migration was a very different experience. It is one that is still part of the migrant experience today, where men often go first and then are followed by the rest of their families.”

Other themes of the past resonate in the present.

“Long-distance migration is fraught with opportunity, fear, achievement and degradation,” Fogleman says. “There’s tragedy, wars, triumph, ethnic rivalries, tensions, identity issues and questions about ‘illegal’ migrants. That’s how it is now and has always been.”

In addition to his Guggenheim Fellowship, Fogleman has been an Alexander von Humboldt Research Fellow, Fulbright Honorary Senior Scholar and guest researcher at the Max Planck Institute for History in Göttingen, Germany. He also held the Fulbright Distinguished Chair in American Studies at the Goethe University in Frankfurt am Main in 2008 and 2009.