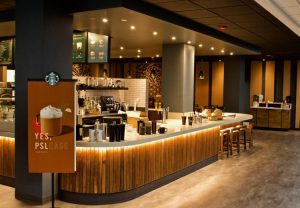 The university has expedited the opening date to align with Homecoming so students and alumni alike can see the renovated spaces, Dean of Students Kelly Wesener Michael said.

Though the landscaping has been delayed due to weather, the renovation project is in its final stages and is considered to be on track, she said.

Because the timeline was accelerated to allow students access to the ground floor, not all stores will open Saturday, Wesener Michael said.

Wesener Michael said she anticipates students will be most drawn to the Starbucks. Starbucks is located on the ground floor and will open Saturday, and its island-bar layout is believed to be the latest Starbucks design concept, NIU spokesperson Joe King said.

“It’s a really welcoming environment,” Wesener Michael said. “We’re hoping that feeling of a coffee house — in the form of Starbucks — is one of the core elements. That’s going to be an important part of this.”

The public seating area on the ground floor is now furnished and has been redesigned to include natural light. The redesign was heavily influenced by students, Wesener Michael said.

“One of the things that was really important for us was the student input into the design of the space,” Wesener Michael said.

Wesener Michael said the university had conversations with students via extensive surveys regarding colors and textures, food venues and helpful traffic patterns.

The university also considered designs that represented Huskie pride while blending agricultural influences with an urban feel, she said.

Wesener Michael said the landscaping and the Student Center’s redesign was intentionally tied to the look and feel of campus and the MLK Commons.

She said the remodel, along with the Neptune refresh and improved Founders Memorial Library services, bring a new energy to the center of campus.

Wesener Michael said there are three purposes the renovated space will serve: The project seeks to bring engagement back to the heart of campus, create a gathering place for students, faculty and staff to interact and to round out the campus-dining strategy to provide a variety of options for the NIU community.

On the upper level of the Huskies Den, a bar will serve alcohol to students and faculty. During limited evening hours, the bar will serve bottled beers and single servings of wine.

While this is not the first time alcohol will be provided on campus, it has never been served at a dedicated campus venue. Wesener Michael said the bar will open up opportunities for NIU community members to come together.

“I hope and imagine that the student activities space will be busy with students coming in and out as we begin to really rethink what it is to be engaged [on] our campus,” Wesener Michael said. “It’s coming to the heart of what students will be seeing every single day and opening their eyes up to the possibilities of what leadership is and how they might get involved in ways they’ve never thought about.”

The Student Center will also see a QDOBA Mexican Eats which, due to the franchise agreement, will not open until March, King said.”