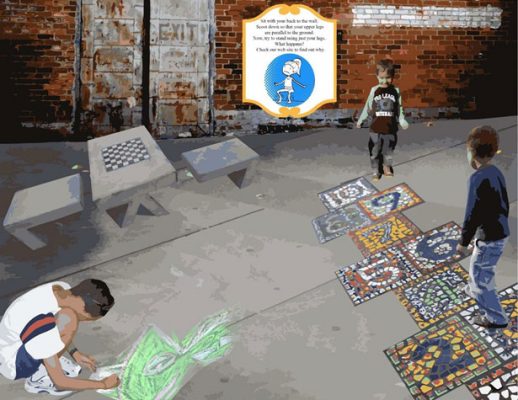 NIU STEAM Works has been selected as a finalist in the Play Everywhere Challenge, a $1 million national competition that will award funding to outside-the-box ideas that make play easy, available and fun for kids and families in cities across the United States.

The challenge is hosted by KaBOOM!, a national non-profit dedicated to bringing balanced and active play into the daily lives of all children, particularly those growing up in poverty in America.

Winners will be announced in early fall.

STEAM Works staff in NIU’s P-20 Center envisioned Playfully DeKalb, an innovative plan to create a number of playscapes in low-income areas of DeKalb, so local families can engage in fun, community-oriented activities on sidewalks and open spaces in their neighborhoods.  Playfully DeKalb was selected as a finalist out of a pool of more than 1,000 applications nationwide.

“STEAM Works is devoted to engaging the community in exciting, interdisciplinary, educational experiences. We love the idea of bringing these spaces to the neighborhoods that need them most and see this project as expandable from year to year.” said Tracy Rogers-Tryba, a STEAM Works staff member.

The competition attracted an outpouring of creative ideas to spark kids’ imaginations and get their bodies moving.

“We were astonished at the number and quality of the applications we received,” said James Siegal, CEO of KaBOOM! “To us, it shows a huge, untapped potential to reimagine cities with kids in mind, and boost their opportunity to get the play they need to thrive. And when kids thrive, cities thrive.”

Kids need play to grow up healthy, resilient and ready for life.

Research shows play is vital to healthy brain development and is pivotal to how kids learn problem-solving, conflict resolution and creativity – in other words, the skills they need to succeed as adults.

Yet today, too many kids, especially those growing up in poverty, are missing out on play because of families’ time pressures, the lure of screens, and a lack of safe places to go.

Meanwhile, evidence shows missing out on the chance to play puts kids at risk for challenges ranging from obesity to anxiety to trouble adjusting in school.

“We’re thrilled at the possibility that DeKalb’s kids could win this fantastic new opportunity to learn and develop from play,” said Pati Sievert, director of NIU STEM Outreach. “If we’re selected as a winner, we hope that Playfully DeKalb will be just the beginning of a larger effort to make play a way of life for kids and families in our community.”

KaBOOM! is hosting the Play Everywhere Challenge in collaboration with the Robert Wood Johnson Foundation, Target, Playworld, the U.S. Department of Housing and Urban Development and the National Endowment for the Arts.

To learn more about NIU STEAM Works ideas for making play happen everywhere in DeKalb, contact Rogers-Tryba at (815) 753-2090 or tlrogers@niu.edu.