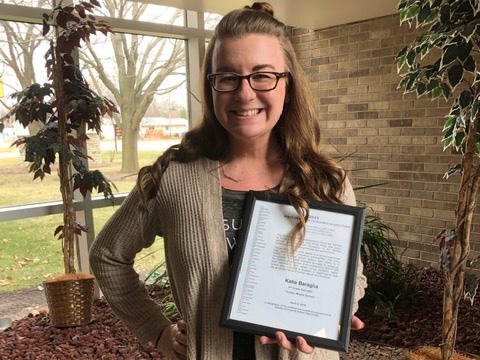 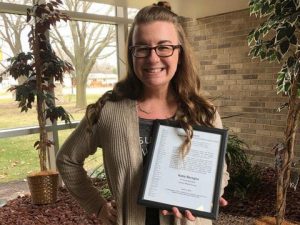 DeKALB – Katie Baraglia, a seventh-grade teacher at Huntley Middle School, has been named the 2019 recipient of the Wirtz Award for Excellence in Education.

According to a release from the Wirtz Foundation, the award is meant to recognize educators with high standards of achievement who bring quality to the public school system and vitality to the community.

Sheryl Nakonechny, of the Wirtz Foundation, said Baraglia was chosen based on a number of letters of recommendation sent in by her D-428 colleagues and students.

One in particular stood out.

“One of her letters of recommendation was a very compelling letter by one of her students,” Nakonechny said. “It was about her ability to relate to kids, and to help them problem-solve social situations, and her listening ability.”

The award is given annually to recognize the distinguished service of outstanding teachers in DeKalb’s District 428 who empower young people or promote programs or organizations that empower students’ sense of value and purpose.

Nakonechny said Baraglia also was celebrated in recommendation letters for being a mentor to other teachers. The Wirtz Award was established by the foundation in 1989 to honor William Wilbur Wirtz, Alfa White Wirtz and Jeann Sohner Wirtz.

*Story provided by The MidWeek