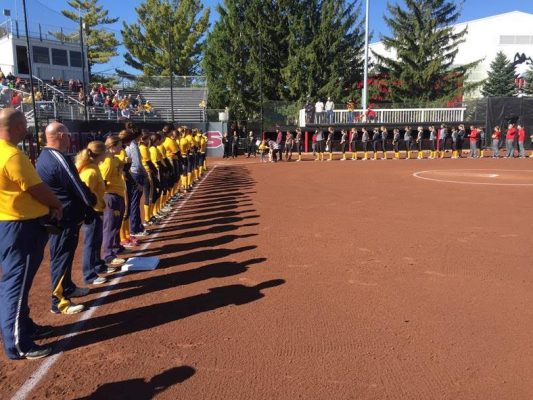 On Saturday, October 8th, NIU softball field held their first game in support of pediatric cancer awareness. Thanks to senior softball player, Kali Kosakowski, NIU teamed up with Cal’s Angels. This organization is based out of St. Charles and founded by Tom and Stacey Sutter who lost their 6 year old son, Cal, to leukemia.

The goal of the organization is to grant wishes, promote awareness, and support research of pediatric cancer. NIU and Rock Valley players sported gold socks, sweatbands, and ribbons in support of the theme, “Be Gold, Go Gold.” The theme inspires cancer fighters, survivors, and their love ones to be bold and stand up against the fight against cancer.

Before the game, players line up on the baselines as 6 year old Autumn’s heart wrenching story was told to the audience. The players and fans listened to the troubling experiences Autumn endured while she fought her battle with Leukemia. Members of the crowd were moved when they heard that in the middle of Autumn’s intensive treatments, Cal’s Angels had granted her one wish: to have a beautiful Winter Wonderland in her own home. After a hard fought battle, Autumn is now in remission and living a happy 6 year old life.

Throughout the game, Cal’s Angels sold gold shirts with the “Be Gold, Go Gold” motto proudly on the front. The proceeds went to the organization to help grant wishes of children battling cancer. The first NIU softball pediatric awareness game was a success and will hopefully continue to be a proud tradition.