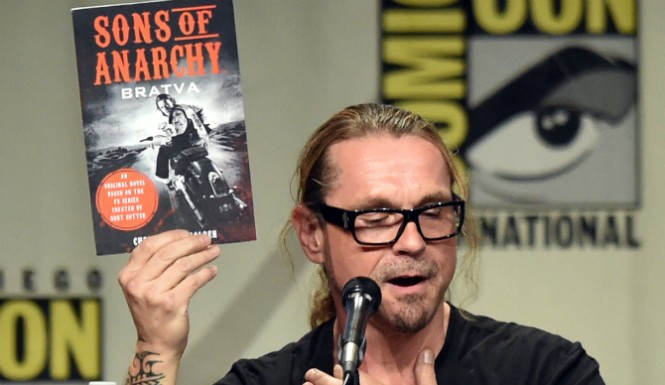 ‘Sons of Anarchy’: Kurt Sutter, The Man Behind The Most Watched Show in FX History
Posted: July 3, 2015
Source: www.inquisitr.com
Sons of Anarchy was a remarkable TV series by any standard.Since its inception in 2008, Sons of Anarchy went on to garner more than 10 million viewers by the time the first episode of its final season premiered on September 9, 2014, according to Rolling Stone. It inspired a host of fanatical fans who formed motorcycle clubs and styled themselves after the main players of the TV drama, sporting tribal tattoos, facial hair, and long ponytails. And all of this was achieved by the relentless vision of one man, Kurt Sutter, who came to Hollywood as a nobody, and is today one of the most respected men in network television.Born to middle-class parents in the small town of Clark, New Jersey, the Sons of Anarchy creator was a dreamy eyed kid from the very beginning. He spoke to NJ.com about his childhood.

“All my friends were on TV. I had more fun by myself in my imaginary world than I did playing with other kids.”

Having written, produced, directed, and co-starred in two of television’s darkest dramas in recent memory, Sons of Anarchy and The Shield, Sutter surprisingly credits his sensibilities to a completely different sort of entertainment.

“I joke that I learned the essentials of storytelling from Hanna-Barbera, but I pretty much did. That kind of television is what enamored me as a kid, and that’s what really got me hooked. You could say that’s where it all began.”

After earning a bachelor’s degree in Mass Media from Rutgers University’s Department of Journalism, Sutter headed to New York City to study the Meisner Acting Technique at a two-year conservatory. A year after completing his course, he headed to Northern Illinois University to obtain his Masters of Fine Arts in performance and directing. It was at NIU that Sutter’s horizons expanded in new ways.

In the summer of 2000, Sutter made the move to Los Angeles. Before he would bag his career-defining show Sons of Anarchy with FX, however, Sutter struggled to settle in the hostile environs of show business. After completing a few commissioned speculative scripts, Sutter’s meeting with The Shield creator Shawn Ryan opened doors for him. Hired as a staff writer by Ryan, Sutter moved through the ranks to become The Shield’s executive producer after six seasons.

There has been no looking back since. Sutter already had the basic foundations in place for Sons of Anarchy by the time The Shield drew to a close, and spending a few months with members of a motorcycle club in northern California lent a sense of insider authenticity to Sutter’s vision. Building on his theatre background, Sutter wrote Sons of Anarchy, which, as Rolling Stone reported, drew as much from Hamlet as from his life experiences.

The rest, as they say, is history. In its seven seasons, Sons of Anarchy became one of the most beloved shows of all time, and today Sutter is regarded as a genius in Hollywood circles, known for his unflinching eye for detail.

Now that Sons of Anarchy is wrapped up, Sutter is deep in the throes of his next series, called The Bastard Executioner. FX’s John Landgraf spoke to Rolling Stone magazine about the basis of the new show.

“Ultimately, just like Sons of Anarchy, it’s got a very strong Shakespearean journey in the center of it.”