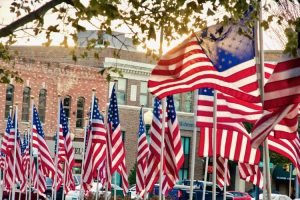 “Growing up, I had three veterans in my immediate family, as well as a few others spread throughout my family tree. Having veterans in my family means that I take a great deal of pride in their service and in observance of Veterans day on Monday.

This day means more than just saying thank you. It is a day to recognize those who have risked their lives for our country and recognize the sacrifices that were made.

My great uncle was a soldier in Vietnam. He served in the U.S. Army for two years. Throughout my life, he has always had a sense of patriotism and a distinguished nature about him. It is hard to think of a time when he isn’t wearing a patriotic symbol. He doesn’t talk about his service much, however, he often attends veterans’ events. Whenever we see another soldier or veteran, he goes out of his way to show them respect in some way. He lives every day with pride, and I will always honor him.

My grandpa served in the U.S. Navy during the Korean War. I remember how proud he was to wear his Korean veteran hat and to be a part of the U.S. Military. He would show us photos from the time when he served. You could sense the pride he carried with him. He met his best friend when they were drafted, and they remained best friends for the rest of their lives. The bond the two had was incredible. It was clear they shared a deep connection no one else can understand.

Veterans Day is a way for everyone to take a step back and to connect with other veterans, even if you are not one yourself. Veterans fought and risked their lives so we can live in the America we know today. They trained for months and fought for years with valiance and honor. This is the day we can give back to them.

DeKalb honored veterans with a 24-hour Veterans Vigil at he DeKalb County Courthouse, 133 W State Street, Sycamore, IL. The vigil was held from 4 p.m. Friday until 4 p.m. Saturday. The Avenue of Flags will remain up until Monday. Events such as these are just one of the many ways to honor veterans.

There are over 17.9 million veterans in the U.S., according to the 2018 Census, which means there is a strong likelihood you know a veteran. It is also important to recognize active military members as they are the ones currently fighting for our country.

Take five minutes to strike up a conversation with a veteran this Veterans Day. From talking to my great uncle and grandpa, I can tell you that you’ll learn something. At the very least, you can witness the pride and unmatched patriotism they have.

It is important to remember those living and those who have since passed, either while serving or after.”